Ten hinterland villages will be equipped with utility-scale solar farms. The use of ‘rooftop’ solar panels in hinterland communities will be terminated and will be replaced by utility scales solar farms which are more viable.

This was revealed today by Minister of Public Infrastructure, David Patterson at the final day of the National Toshao Council’s meeting at the Arthur Chung Conference Centre.
The minister was at the time responding to concerned village leaders on the status of improving their electricity supply.

“Small areas will be looked at next year. The solar farms will be large enough for all villages in one area. President (David) Granger already signed a GYD $3.2Billion (US $15Million) line of credit with International Solar Alliance (ISA) for this,” Minister Patterson explained. 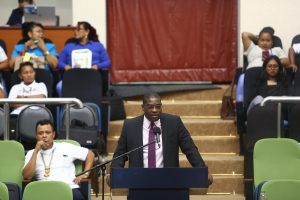 The minister noted that the villages will be identified by the Ministries of Indigenous Peoples’ Affairs and Communities. This initiative forms part of the government’s move to a green economy and will aid in reducing the negative effects of fossil fuels while mitigating climate change effects.

Guyana signed and ratified the framework agreement of the International Solar Alliance on January 30 2018. The ISA Framework Agreement was launched on November 30, 2015. It is an action-oriented international and inter-governmental organisation that aims to maximise the harnessing of solar energy potential, modernise energy systems, universalize access to energy, accelerate economic development and alleviate poverty.
About four megawatts of electricity will become available under this programme.

Further, last month Minister Patterson announced that several solar and hydro projects are on track to be completed by the end of 2020 at a total capacity of 30 megawatts. Lethem, Mahdia, Kato and Bartica are some communities expected to benefit.