Social Cohesion Minister, Amna Ally today expressed how proud government is with the strides that are being made by young people.

“This government recognises the impact the young people are making and we are proud of you,” Minister Ally said as she presented five bicycles today, to the top five National Grade Six Assessment (NGSA) students at the Education Department, Lethem, Region Nine.

Delivering brief remarks prior to the bicycles’ handing over, Minister Ally said that, “we believe that there is a lot of inequalities in our society, children cannot go to school because of  poverty and discrimination in some form or the other…and we are working to change that.” 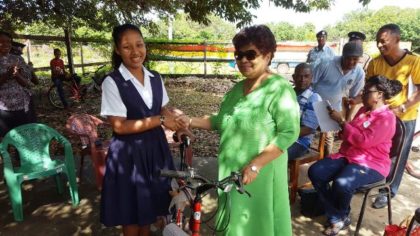 The social cohesion minister told the students and parents who were present at the handing over that President David Granger wants every child, in every region and community of Guyana to have access to quality education.

It was because of the president’s  vision, the three Bs,  buses, bicycles and boats programme was initiated and later developed into five Bs to include breakfast and books.

The minister encouraged the students to continue aiming for excellence as, “this bicycle is just an encouragement so continue to do us proud.”

The students all came from the Arapaima Primary School. They are: Akima Demitro, Isharia Richardson, Josanya Foo, Kayla Xavier and Terri Mc Rae.

Minister Ally is currently heading a high- level government team in the region. The team is fanning out across to communities, meeting with residents. Details of these meetings to follow in a subsequent GINA release. 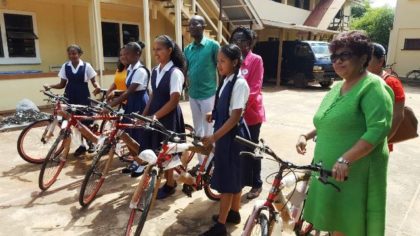 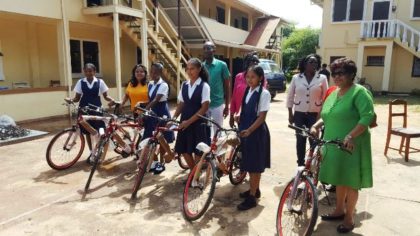