Trafficking of narcotics continues to be a worldwide issue; however, Minister of Public Security, Hon. Khemraj Ramjattan said Guyana must be able to address the problem effectively. The minister was at the time addressing ranks of the Customs Anti-Narcotics Unit (CANU) undergoing a training session. 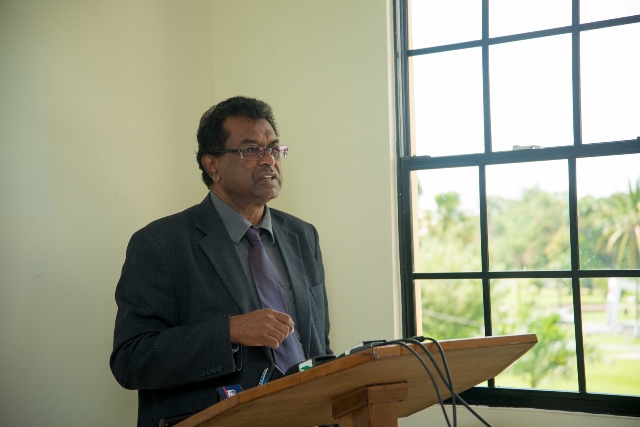 The exercise is aimed at enhancing the capabilities of its officers and building greater cooperation between the agency and its local and international counterparts. Minister Ramjattan told the officers that CANU has to ensure it has the capacity required to counter the trade of narcotics and its adverse effects.

“The people behind it do not care as to the consequences of what happens to adults and young children that become addicted; they only care for the profits,” the minister said.

The drug trade, he noted, disrupts the economy. He called on the officers to understand the importance of their roles in curbing the crime.

“I would urge given all that is happening in the world, all the attempts by the Mafiosi’s to make Guyana a continued transit point; we have to be on our guard to ensure that that does not occur, as used to be the case before.”

The Coalition Government, he said, is working with all the relevant US agencies and departments to address the issue.

Deputy Head of CANU, Lesley Ramlall, in brief remarks, said that for the year 2019, there has only been one drug bust in the Caribbean. Nevertheless, he pointed out that the Caribbean continues to be a hot zone for narcotics trafficking.

“Looking at the situation in the Caribbean, there have not been any significant seizures thus far for 2019 except for one in our neighbouring country in the east. However, we must be cautious of this since over the last eight years the amount of cocaine flowing through the Caribbean region has more than quadrupled, increasing from more than 35 metric tons in 2010 to 184 metric tons in 2018,” Ramlall said.

The officers were also made aware of the demand for various new types of narcotics, which is also on the rise due to the number of record seizures locally and in the region.