We will continue the developmental thrust of Lethem – Min.  Hastings-Williams

―Division will stagnate, and we do not want that in the Rupununi. We want social cohesion

Minister of Public Affairs, Dawn Hastings-Williams on the eve of Guyana’s 49th Republic Anniversary joined hundreds of Region Nine residents at Revolution Square, Lethem and assured of the government’s commitment to the continued development of Lethem and the entire Upper Takatu-Upper Essequibo Mazaruni.

Delivering the feature address, Minister Hastings-Williams” said “Rupununi is special and has great potential for the development of this country. It was through the visionary leadership of President David Arthur Granger that Lethem achieved township status. Despite the naysayers the Coalition government decided to make Lethem a municipality to ensure the residents were afforded all the necessary public services closer to their homes,” Minister Hastings-Williams said. 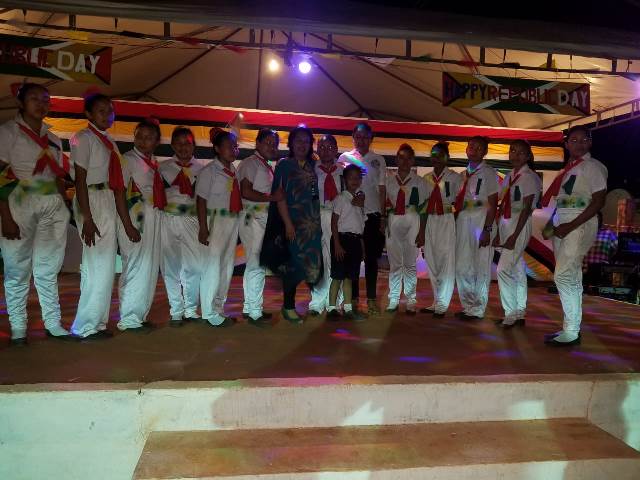 Minister of Public Affairs Dawn Hastings-Williams and some of the young people who participated in the cultural programme at Lethem’s 49th Republic Anniversary celebration. 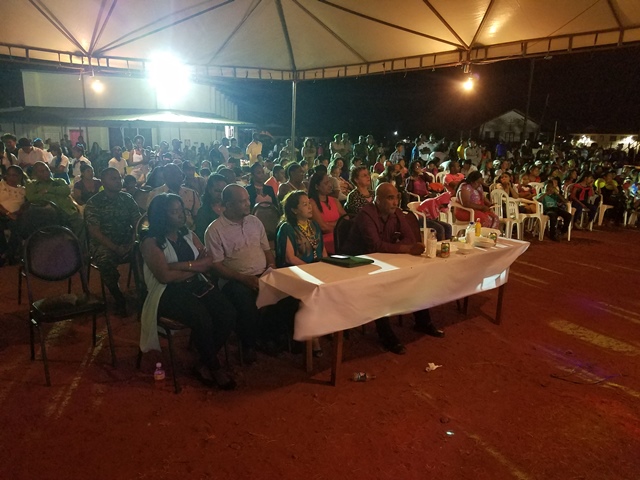 Additionally, the Minister noted that has the APNU+AFC government delayed its decision to bring township status to Lethem the community town and its environs would not have seen the magnificent growth and development experienced in the little more than three years under the administration of this government.

“We have seen infrastructural development; it was only last week Friday my colleague the Minister of Education, Dr. Nicolette Henry commissioned a new nursery school and the first ever smart classroom within this region. Our young people deserve to be connected to the wider world and your government will continue to bring development and services to this region whether ICT hubs, quality education, proper health care, better roads, better airstrips or aerodromes …”

Engaging the large crowd on the achievements of Guyana in recent times Minister Hastings-Williams said there is much to celebrate given the country’s growth on both the local and international fronts.

“I quote Kaieteur News of December 30, 2018, ‘APNU+AFC coalition has restored Guyana’s World Standing and credibility.’ worth mentioning on this festive occasion as a reminder of how far we have advanced.”

She continued “the Coalition Government is leaving nothing to chance to protect our national sovereignty and territorial integrity against Venezuela, plus the right of every Guyanese to benefit from the many resources that are ours – forest products, gold, diamonds, manganese, bauxite, oil and other minerals.”

The Public Affairs Minister also commended the vision of President David Granger and the APNU+AFC government to ensure that every Guyanese enjoys the good life and Guyana becomes a happy place.  “I want to share with you that the citizens and the leaders have to work together… if we do not work together to make our communities and country happy, we are not going to move forward.”

In recognition of the efforts of the Regional Administration and residents to organize the night’s event Minister Hastings-Williams said they have achieved a great feat and must continue to work together for the growth of the region. She also commended the region and the business community for their response to the needs of those who find themselves in difficult circumstances.

“We have opened our arms have assisted our brothers and sisters from Venezuela who are coming here to find food shelter and comfort and we must be proud … you are very good citizens we always help each other in times of crisis… I urge you, the residents, to continue to cooperate with each other because in unity you will grow. Division will stagnate. We want cohesion and so as we must remind ourselves to put aside all our differences and not rely on our political affiliation, ethnicity, religion… I want us to look at each other as Guyanese, true Guyanese, working to build this nation.”

This year’s theme for celebrating Guyana’s Republican status is, “Celebrating 49 with Victory in mind” to this Minister Hastings-Williams noted that Guyana has much to celebrate especially given the achievements of government over the last 3+ years.

She reminded the gathering of the current political challenges faced by the country and assured: “in the words of our President David Arthur Granger, keep calm and carry on.”

The evening activities were punctuated by several cultural items performed by students of the St. Ignatius Secondary School and the Department of Education among others. Messages of encouragement were delivered by the Mayor of Lethem, Regional Chairman Brian Allicock.