“We will put your interest first,” says Minister Harmon to sugar workers

The Government of Guyana is once again assuring sugar workers that their best interests are being considered before any decision is taken in relation to the Skeldon, Enmore and Blairmont Estates. 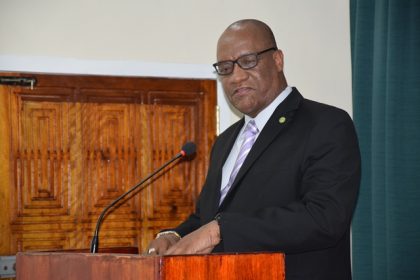 This assurance was given by State Minister, Joseph Harmon on Thursday. He said that the head of the Special Purposes Unit (SPU), which was established to oversee the divestment and privatisation of the Guyana Sugar Corporation (GuySuCo’s) assets, has been appointed and has started work in this regard.

Minister Harmon said that “there are certain things which have to be done, like valuation of property and so on…He is also receiving expressions of interest from various companies, but from my understanding of what’s happening, having spoken to some of those companies.”

According to the State Minister, the opportunities for the workers at these estates may very well be enhanced if the Government goes in the direction of privatisation, however, he noted that “the key element in all these proposals and what we have always asked for, is the consideration of the workers and their families.” Minister Harmon said this the central focus of Government and the way it deals with issues pertaining to the Guyana Sugar Corporation (GuySuCo).

“This is critical and we do not put the lives and livelihood of the Guyanese workers above any other interest,” he emphasised.

Speaking directly to the sugar workers, Minister Harmon said: “we will put your interest first.”

GuySuCo has embarked on a series of measures aimed at changing its declining fortunes. This entails the divestment of the Skeldon Estate, the amalgamation of the Wales Estate with the Uitvlugt Estate and surrounding land for lease to employees.

These adjustments mean that GuySuCo will be scaled-down into a more efficient entity that focuses on producing sugar to satisfy the domestic and foreign market.