The consensus of voters on the West Coast of Demerara is that Guyana will continue to move forward.

Voters, both young and old lined up at various polling stations, eagerly awaiting their opportunity to cast their ballot. 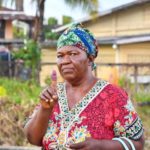 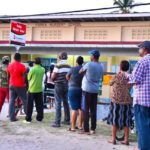 Voters lined up at the Parika Nursery School. 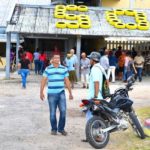 Apart from exercising their constitutional right, many views this as a decision that will directly affect the country’s growth and development.

At the Parika Nursery School, persons were queuing since 5:15am.

The first to cast her vote was 62-year-old Gwendoline Thomas who said she is casting her ballot to ensure her grandchildren have a better future.

“We want a government that will show love to each and every Guyanese and as citizens of Guyana we must be able to reap the benefits,” Thomas said.

Roy Anthony Thorne could not contain his exuberance as he had anticipated this day for a long time. “Everybody votes for a good leader who they know will lead this country to the best of their ability, so this is not only for me but for my children and grandchildren.”

Over at the Vergenoegen Nursery School, Ameena Mullin, cast her ballot just after the polls opened. Mullion said regardless of which party wins the election she would like to see the continued improvement of the local education system along with a better future for her five-month-old child.

Monica Christiani of Uitvlugt noted that voting at general elections places a tremendous responsibility on citizens. “We have decided that we have to elect somebody who we know can monitor and govern this country the right way, it’s not about money but it is more about a future for the young ones… we need everybody to benefit,” she said.

Further down the coast, Nirmal Sukhdeo hopes to see the economy benefitting from a boost in human resources, this he opined can be ensured by providing jobs for young people and the establishment of more business and industries.

A quick stop at the West Demerara Secondary School saw a large voter turnout there. Many shared that they are voting with the “interest of the nation at heart”

Also, expected to vote along the West Coast, at Leonora is PPP/C Presidential candidate, Irfaan Ali.