The Government’s White Paper on the future of the sugar industry is to be laid in the National Assembly on May 8, 2017. This was disclosed by Minister of State, Joseph Harmon today, at a post-Cabinet press briefing at the Ministry of the Presidency.

The laying of the document in the National Assembly would continue the government’s trend of ensuring openness, transparency and accountability in the determination of the way forward for the industry, Minister Harmon said. 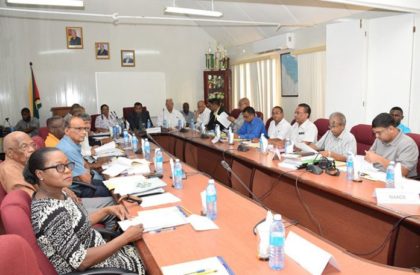 Flashback, December 31, 2016, Representatives from the sugar industry in the boardroom of the Ministry of Agriculture, discussing the options for the way forward for the ailing sugar industry

“This (the laying of the White Paper) here is another attempt at basically engaging all stakeholders in an important decision that has to be made on the sugar industry,” he said.

Whilst Minister Harmon did not go into great details as to content of the White Paper, he did however, highlight three sections; the feasibility of amalgamating some of the sugar estates and factories where appropriate, the requirement for divestment of some facilities, and the utilisation of some of the facilities of the estates, particularly the land, for sugar workers and cane farmers to undertake agro-based activities.

Whatever the content of the White Paper, Minister Harmon reiterated the administration’s position is that, “the sugar industry is not being closed down.” He explained that based on the financial and economic realities, the government has to make some adjustments to the industry. “These adjustments are what are going to come before the National Assembly in the form of the White Paper,” Minister Harmon explained.

The draft White Paper on the sugar industry’s future was submitted by Minister of Agriculture Noel Holder to Cabinet for its consideration at its Tuesday, April 18 meeting. Cabinet discussed the submissions in the draft White Paper and granted its approval for the document to be laid in the next sitting of the National Assembly.

The White Paper follows a process of overhauling of the industry which includes a Commission of Inquiry into GuySuCo, the subsequent setting up of a special Task Force to look at options, on the way forward for the sugar company, and thereafter, presenting these options to the government.

At the level of Cabinet, it was then decided that in moving forward with these suggestions and options for the industry that consultation must be held with the stakeholders.  The government therefore did in fact lay these options before the industry’s stakeholders. Several meetings were held at the Ministry of Agriculture between the government and stakeholders including representatives of GuySuCo, the Opposition, the Guyana Agricultural and General Workers’ Union (GAWU), the National Association of Agricultural, Industrial and Commercial Employees (NACCIE), as well as representatives of the sugar estates. These consultations resulted in the government’s position on the industry becoming “a little bit more crystalised,” Minister Harmon said.

At that consultation, the government did provide for the stakeholders and other entities, which may have proposals on GuySuCo to put them forward. “As you have known, the Leader of the Opposition (Bharrat Jagdeo) has been saying they have a plan for GuySuCo, so we say put your plan on the table, and let us discuss it, but we have heard nothing from them, other than talk up to now,” Minister Harmon said. He explained that the government did in fact receive some proposals from GAWU, which were taken into consideration in the preparation of the White Paper.

Minister Harmon pointed out that government expects that in the National Assembly the debates on the White Paper would take place, but that it would get the clearance and go ahead to ensure that it put systems in place to reverse the fortunes of the industry.

It has become a necessity for the government to make urgent decisions on the sugar industry, given the financial and technical evidence presented. Minister of Finance, Winston Jordan in his presentation of the 2017 budget had indicated the status quo of the sugar industry can neither be sustained nor maintained. According to the Finance Minister as currently structured, the industry would require government’s support to the tune of $18.6 billion and $21.4 billion for the years 2017 and 2018, respectively.

The Finance Minister had noted that this is an untenable position, and one that would seriously jeopardise the fiscal stance of the government, while compromising resource allocation to other critical and important areas. He had further noted that based on the COI, the stark reality of the situation is that money injected into sugar, in its current state, is money wasted that would make no impact on the operating losses and cash deficit status of the industry.