Women’s equity among men continues to be pushed across the world. Recently, Parl Americas, held its eighth annual gathering on gender equality under the theme, “Diversifying political power to build inclusive societies.”

Representing Guyana at the conference in Ecuador were Minister of Social Protection, Volda Lawrence and Minister within the Ministry of Indigenous Peoples’ Affairs, Valerie Garrido-Lowe. 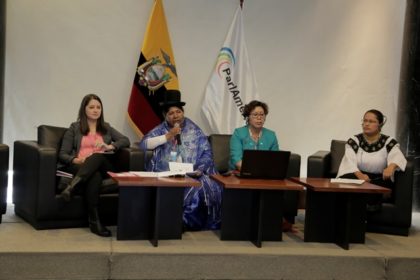 Minister within the Ministry of Indigenous Peoples’ Affairs, Valerie Garrido-Lowe at the ParlAmericas’ Group of Women Parliamentarians, Ecuador

The gathering attracted Parliamentarians from 29 countries across the Americas and the Caribbean. The objective of the meeting was to exchange experiences and promising legislative practices in support of the rights, political participation, and social equality of women.

Speaking with the Government Information Agency (GINA) on her return, Minister Garrido-Lowe said that one of the issues discussed was, the significance of educating men and women of the role women have in society. “In order to propel women forward, we also have to educate men so that they can realize where we want to go, why we want to go and why it is so important and that we cannot do it without their support,” the minister said.

While the support of the men is critical, Minister Lowe pointed out that women too must realize their potential. “Women have to realize that we can walk beside a man, that we are as valuable, I would say invaluable to life, to the man, so there is no reason for us to feel that we are below a man,” the Minister explained.

Minister Lowe made a presentation on indigenous Women’s leadership. She said that after listening to other presentations, it was realized that Guyana was heading in the right direction. 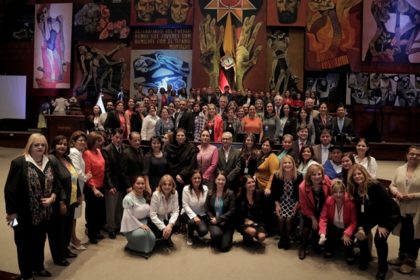 Participants at the ParlAmericas’ Group of Women Parliamentarians, Quito, Ecuador

“When I listened to the other presenters, I realized how advanced we were in legislation and in our treatment, in our interaction with our indigenous people,” Minister Lowe said, added that many indigenous people around the world are still fighting to have basic rights.

“Our constitution has enshrined how we treat the indigenous people. Added to that, we have the national Toshaos council, they also have their own governance system that we do not really interfere with, and they choose their own leaders,” the Minister explained.

Some of the rights of the Indigenous peoples of Guyana include, the right to life, protection against slavery, protection of culture and protection from inhumane treatment, to name a few.