Women’s empowerment – a key feature of the APNU+AFC administration

Guyanese women are more empowered and over the last four years under the Coalition administration more of them have assumed leadership positions, while others have been recognised for their work.

Addressing the mammoth women’s rally held at Parade Ground, Georgetown, Minister of State, Hon. Dawn Hastings-Williams noted that under the APNU+AFC administration the role of women in the development of the country has been acknowledged. 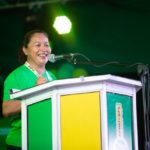 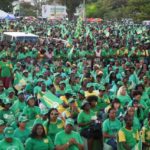 A section of the audience at the Coalition’s women rally at Parade Ground, Georgetown.

This confidence has been reflected at the highest level with the appointment of eleven women ministers of government. At the regional and municipal level women are standing at the helm of work to improve their respective communities and several are recipients of national awards for their unflagging commitment to service, promotion of equality and inclusivity.

It was also highlighted that many women also fill the positions of Permanent Secretaries and Regional Executive Officers that support the Finance Minister in ensuring budgetary allocations play an instrumental role in the growth and development of all sectors across the country.