Over 20 residents from three Hinterland communities in the Moruca sub-district, Region One and another from the Pomeroon River, Region Two have benefitted from a woodworking training exercise. 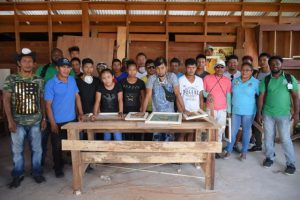 The five-day workshop held in Kumaka from November 26-30, was facilitated by Government Technical Institute, lecturers Rohan Mangal and Mark Thomas.

Mangal explained to the Department of Public Information (DPI) that over the past five days the participants were instructed in basic wood joining techniques and standard measurements.

“They are quick learners, they learnt to build a chair, chest of drawers, they also learnt standard measurements for furniture and designing picture frames and they learnt to do safety on the machine,” Mangal explained.

The participants between the ages of 18 and 53 came from the communities of Kumaka, Wallaba, Haimaracabra Creek and St. Monica along the Pomeroon River.

Community Development Officer, Moruca Sub Region, Mary Zola Da Silva told DPI that the expectation is that after the workshop the participants will return to their communities and gain meaningful employment, thereby bringing income into the community.

“We know we have a lot of people in the community who would need furniture, especially since it’s the Christmas season. We have all the materials here and the boys would start working and get some business from this training. I learnt from the trainers that we don’t have all the equipment here but I asked them to make a list so we can get them,” Da Silva said.

Derrick Henry from Haimaracabra Creek said he was excited when he heard about the training. He intends to use the knowledge gained and to be better furniture making and increase his supply base. “I’m happy to build my capacity in building furniture with the joinery and cutting as well. In our workshop, we explored and learnt a lot. Lots of people need furniture but because we don’t have money circulating in our community it is costly. However, with this project, we will work to supply people with reasonably-priced products and eventually supply the international market,” he said.

Sheldon Peters another young participant from Waramuri, told DPI that “the training has boosted my furniture making skills. When I return to my community, I will use this knowledge in the furniture factory there and demonstrate the skills I have gained.”

Theresa Abrams is one of two girls who participated in the workshop. She also plans to become involved in the furniture-making business.

Meanwhile, training in fish rearing, which was recently concluded in Mabaruma, cattle rearing, transportation and the fuel depot are the other four typologies/components under the CDPs.

Logistics Officer, ADF, Ministry of Indigenous People’s Affairs Ovid Williams said that training in these areas is ongoing countrywide, in some cases simultaneously. Approximately $1Million was spent on the training in Kumaka.

CDP is an important project document that encapsulates economic growth, development, and visioning. It follows the same procedure and approval process as that of the Village Plans prepared by the Village Council, which is governed by the Amerindian Act, and approved by village general meetings.