Works on Kitty sinkhole to be completed next month

Works on the Kitty seawall sinkhole project are moving apace, and are expected to be completed in June. The sinkhole developed near the Kitty pump station last December, and a $127.1M contract was subsequently awarded to repair the collapsed roadway. 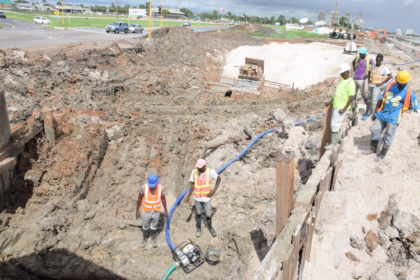 Murli highlighted that the size of the pipe which carries water to the Kitty pump station has been increased from 44 inches in diameter to a 60-inch one which will allow for a larger volume of water to reach the pump station. This is because while assessing the situation before the works commenced, it was discovered that the sump of the Kitty pump which is used to collect and remove undesirable accumulated water was inadequate for the pump, causing it to be able to work for only 15 to 20 minutes. Afterwards the pump would have to be shut off and wait for the water to fill up in the sump, Murli explained.

Hence, to fix this, the size of the pipe had to be increased, especially since it brings water to the western side of the area which encompasses the Guyana Defence Force, Guyana Telephone and Telegraph, and the National Park into the sump at the Kitty pump station.

Further, Murli pointed out that the size of the sump will also be increased. A drop box will be placed adjacent to the existing sump of the Kitty pump which will allow for quicker removal of water off the land.

The Design Engineer related that approximately 160 feet of pipe works have been completed. “We’ve now commenced the works involving the placing of the drop box adjacent to the existing sump, and we are now looking to cast the base and hopefully by the end of the week, we’ll be able to finish that drop box.”

Three pipes feeding the Kitty pump station failed causing the sinkhole. The other works from Stanley place which will capture water coming from of Subryanville and Kitty areas will commence at a later date, immediately after the current works.

Murli said the team is also working to clean main drains in the Kitty, Subryanville and National Park areas to facilitate the smooth flow of water.

The works are being done, utilising funds catered for in the Ministry’s 2017 budget. 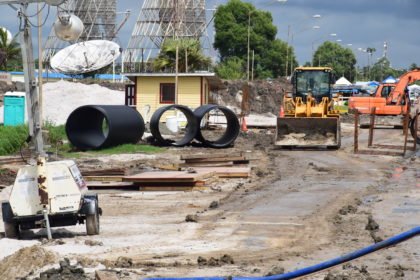 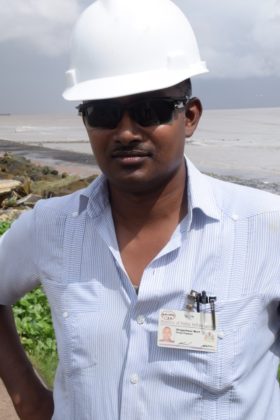