Georgetown, Guyana – (March 30, 2017) President David Granger told the Mayors and Deputy Mayors of the nine municipalities that local government organs, which are established by the Constitution of Guyana, must demonstrate to the people whom they have sworn to serve, the values of representativeness, inclusiveness and effectiveness. He also reminded them to exercise the authority, which was given to them by the people, in a democratic manner. The President made this these remarks at the swearing-in ceremony held at State House, where these officials, who were elected in December 2016, were administered the Oath of Office. 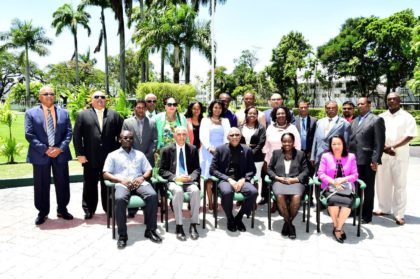 The Head of State reminded the Mayors and their deputies that were elected by their constituencies and as such, the views of all councillors must be considered when important decisions are being made. He also reminded of the Municipal and District Councils Act, which provides for the strengthening of internal democracy by requiring regular elections, within Councils, for the positions of Mayor and Deputy Mayor. This provides an incentive for those entrusted with leadership to exercise authority in an accountable, democratic and transparent manner.

“There will be Local Government Elections in 2018 and if you don’t perform and if you are not effective, your constituents are going to make their feelings impact on the outcome of those elections… I urge you, therefore, to ensure that all of the citizens in your towns and in your wards and in all of your constituencies are aware of the decisions that you are taking, which in the final analysis, affects them and their well-being.  I also urge the leaders of these municipalities to emphasise the principles of representativeness, inclusiveness and effectiveness, characterise their municipal administration,” the President said.

The Head of State explained that Town Councils are part of a tripartite system of government, which consists of the national tier; Central Government, the regional tier; Regional Democratic Councils and the municipal tier; the neighbourhood/local level. “All three levels must work together if we are to deliver the quality of life that our citizens desire and deserve. They cannot be separate; they cannot refuse to cooperate regardless of which Party they come from or in which part of the country they function. All three levels, national, regional and municipal, must work together for the national good,” he said.

In March last year, the local government system in Guyana was given a new lease of life following the holding of Local Government Elections 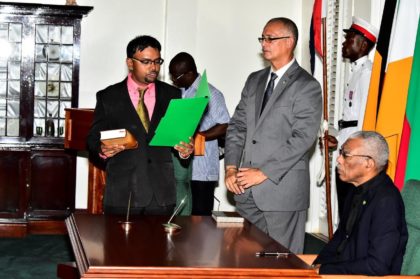 Deputy Mayor of Rose Hall, Mr. Dave Budhu taking his Oath of Office in the presence of President David Granger

for the first time in over two decades. The President said that this restored the representative character of towns and Neighbour Democratic Councils (NDCs) by paving the way for citizens to choose their own local leaders. Importantly, those historic elections saw the creation of three new towns at Lethem, Bartica and Mabaruma.

“It is the Government’s intention that every region will have, at its heart, a capital town. Just as the body has a head, every region must have a head. That capital town will be a center of public services, public health, public education, communications, business, justice, social protection, security and of sport. People from outlying areas must be able to look at the capital town as the center of all of these services,” President Granger said.

Following the swearing-in ceremony, the President hosted a special luncheon for the newly sworn-in municipal leaders in the Baridi Benab at State House during which Minister of Communities, Mr. Ronald Bulkan echoed the sentiments expressed by the President and said that they must secure the confidence of their constituents as well as their colleagues in order to retain their positions. 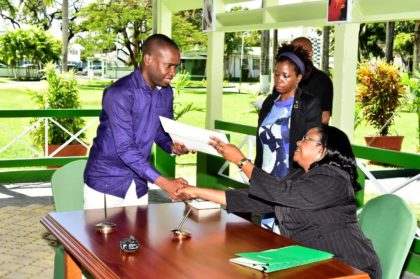 The Minister pointed out that the local government system offers the prospects for solving everyday issues and challenges affecting people’s lives and livelihoods. “Local problems have local solutions and the role of Central Government is to provide support to the local government system and organs to enable you to deliver vital services people. So you are not in confrontation with Central Government and vice-versa. We are all allies and partners,” he said.

Georgetown’s Deputy Mayor, Mr. Lionel Jaikaran said that in keeping with the President’s ‘green State’ agenda, he has been discussions with a foreign company with regard to the greening of City. He noted that he will soon be approaching the Mayor with a full update in order to garner the Council’s support.

The Deputy Mayor also expressed the view that there needs to be more unity among the Councillors in the Georgetown Municipality. “There are issues that will divide us… We must agree to disagree and I think I can be one of the people who can help to facilitate that,” he said.

Meanwhile, Corriverton’s Mayor Mr. Krishnand Jaichand said that they are working to create a committee called ‘Friends of Corriverton’, which would include members of the private sector and ordinary citizens who will work hand-in-hand to tackle issues affecting the municipality. He also spoke of plans to address issues such as garbage collection and poor road infrastructure. He also informed that plans are in the pipeline to build a business hub in close proximity to the No. 79 Market.

Mabaruma Mayor, Mr. Henry Smith, who was re-elected, informed of some of the projects that the Council has been involved in other the past several months. These include the construction of a Town Hall (which is not yet completed), a market tarmac at Kumaka, a playground at Hosororo, a sanitary block at playground at Mabaruma Settlement and several bus stop shelters and roads. 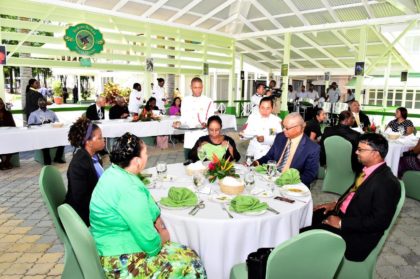 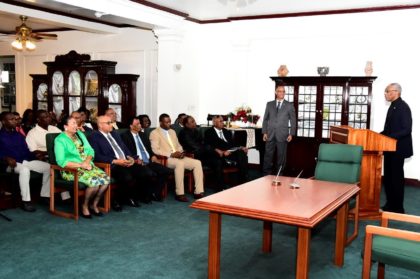