Georgetown, Guyana – (June 14, 2016) First Lady Mrs. Sandra Granger said that the Guyanese society is scarred and diminished by the blight of trafficking in persons and called on all stakeholders to go beyond hearsay and cultural barriers to gather evidence that will lead to prosecution of those that perpetrate this heinous act. She was at the time delivering remarks at an awareness training workshop held at the Roraima Duke Lodge, earlier today. 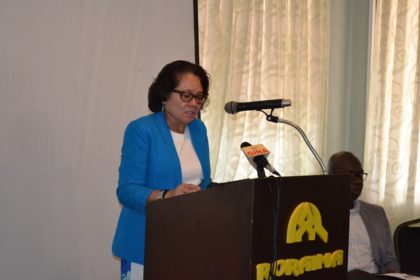 “Slavery was abolished in Guyana one hundred and seventy-eight years ago. Fifty years after Independence, trafficking in persons must not be tolerated… I ask you to reflect on our common humanity to see these young girls and boys as our children, our sisters and brothers, cousins and friends, who deserve our care and protection. I want you to see them as fellow Guyanese entitled to the same rights and freedoms as we are – as valuable resources of our country – our human capital,” the First Lady said.

She reminded officers of the Guyana Geology and Mines Commission (GGMC) and the Guyana Forestry Commission (GFC) that they are at the front line in the country’s fight against trafficking in persons since they work in the remotest of communities in the hinterland where these types of criminal activities are most prevalent.

Mrs. Granger urged them to be more vigilant and to report all suspected cases to the relevant authorities, assist in public awareness activities, partner with local officials and non-governmental organisations and help to ensure prosecution. She also reminded the participants of Article 32 of Guyana’s Constitution, which states:  “It is the joint duty of the State, the society and every citizen to combat and prevent crime and other violations of the law and to take care of and protect public property.” 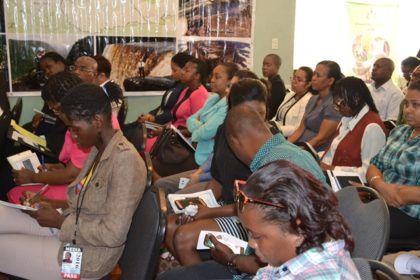 A section of the gathering at Duke Lodge, Kingston

Meanwhile, Minister within the Ministry of Natural Resources, Ms. Simona Broomes in her remarks recounted some of her chilling experiences in trying to rescue victims of trafficking during her tenure as Head of the Guyana Women Miner’s Association (GWMA).

She also spoke of the four ‘Ps’ in trafficking; Protection, Prevention, Partnership and Prosecution and said that, “prevention and partnership are two fundamental pillars that [mines and forestry officers] can contribute to…because the same regulation and the same Act that governs the sector, makes provision for [them] to do so.”

According to the US State Department Report of 2015, Guyana is a source and destination country for men, women and children subjected to sex trafficking and forced labour to which children particularly, are most vulnerable.  The report also states that there is limited Government presence in the interior and that some police officers are complicit to trafficking crimes.  As a result, the country was placed on the Tier 2 Watch List for a third consecutive year.