A total of thirteen (13) parties who will be contesting the General and Regional Elections submitted their list of candidates to the Guyana Elections Commission (GECOM) at the Umana Yana, Kingston today.

While the main parties, APNU+AFC and the PPP/C will be contesting both the General and Regional Elections the smaller parties have their eyes on the regional contest with most opting out of contesting the hinterland regions. 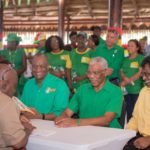 From left: President David Granger Minister of Public Security, Khemraj Ramjattan and Director General of the Ministry, Joseph Harmon handing over their list of candidates to Chief Elections Officer of the Guyana Elections, Keith Lowenfield. 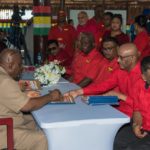 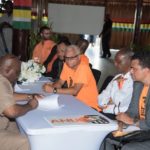 The A New and United Guyana (ANUG) submitting their list. 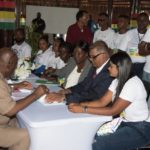 Heading today’s exercise was the APNU+AFC coalition led by His Excellency President David Granger who is also the Coalition’s Presidential candidate and Minister of Public Security, Khemraj Ramjattan, who is the Prime Ministerial candidate. The Coalition will be contesting the General and Regional Election in all 10 administrative regions.

Speaking to the media the Head of State noted his confidence that the Coalition will have a second term since they would have presented a “winning list.”

“I am satisfied that all six parties have complied with the criteria, about gender, generation, about geographic, and competence. We went through the process and it is the best list, it is a winning list,” the President stated

“It’s a great day filled with confidence and we feel comfortable that we are going to win this thing real big on March 02,” Minister Ramjattan said.

For the Peoples’ Progressive Party/Civic (PPP/C) Presidential candidate, Irfaan Ali and Prime Ministerial candidate, Brigadier (ret’d) Mark Phillips lead their supporters to submit their list of candidates. The party, who lost to the Coalition in 2015 will also be contesting the general elections and all the 10 Administrative Regions.

The A New and United Guyana (ANUG) is one of the new parties entering the elections race this race led by Ralph Ramkarran who is a former executive member of the PPP/C and Speaker of the National Assembly. While the party has not named a Prime Ministerial Candidate, it will be contesting seven of the 10 Administrative Regions – Regions 2, 3, 4, 5, 6, 7 and 10.  Ramkarran refuted claims that his party is coalescing with the Federal United Party (FED-UP) party.

A puzzled FED-UP party will only be contesting in the Regional Elections in Regions 5 and 6. Chandra Sohan explained that talks of coalescing with ANUG fell through for many unclear reasons. Ryan Crawford, one of the party’s main supporters was absent.

The United Republican Party (URP) led by Dr. Vishnu Bandu is contesting Nationally and Regionally in all of the 10 Regions. According to Dr. Bandu, his party continues to contest the elections alone as they are ‘different from the others.’

Presidential candidate for The Citizenship Initiative (TCI), Rhonda Ann Lam proudly declared her confidence in their candidates enlisted, noting that her party is female-dominated. TCI is contesting in Regions 2, 3, 4, 5, 6 and 10

Meanwhile, Change Guyana (CG) will be contesting in all regions except 1, 7 and 8, according to that party’s presidential hopeful Robert Badal.

Gerald Pereira of the Organisation for the Victory of the People (OVP) will be contesting the Regional Elections in Region Four only.

Additionally, Lennox Shuman, Presidential Candidate of the Liberty Justice Party (LJP) said that his group has submitted a list of integrity as it seeks to make a better representation of Indigenous peoples all across Guyana. LJP will be contesting in Regions 1, 2, 4, 7, 8 and 9.

The last party to submit their list was the People’s Republic Party (PRP). Leading that party was Timothy Norton who said that the purpose for contesting the 2020 elections is “to eliminate discrimination, ensure there is a level playing field and everyone is treated equally”. He noted that his party will be contesting in General and Regional Elections in all the other regions except for Regions 7, 8 and 9.

Parties were required to submit three separate lists to contest both the General and Regional Elections.

Following the elections, the total number of valid votes cast is divided into 40 and parties are allocated seats according to who has the greatest number of votes.

A total of 25 Parliamentary seats can be drawn from the Geographic Constituency lists. After the elections are over, the total number of valid votes cast in each region are divided into 25 and the parties are allocated seats according to who has the greatest number of votes. For example, in Region Four, seven seats are available. If there are 40,000 valid votes in that Region, one seat will be equal to 5, 714 votes. If one party wins 25, 000 of the votes, that party would be entitled to four seats.

A separate list of candidates who are seeking election to the country’s ten Regional Democratic Councils (RDCs) then has to be submitted. Most RDCs are made up of 35 seats. Therefore, to determine the number of seats for each party, the total valid votes cast in each region are divided into 35 and seats are allocated according to which party has the greatest number of votes.