The Ministry of Public Telecommunications is just shy of being a year old, but it has had a progressive year in 2016.  Guyana was put on the threshold of transformation in public services and the way these services were provided to citizens.

In January 2016, the Ministry of Public Telecommunications was conceived and gazetted. The fundamental purpose of the Ministry is to develop the enabling environment, at the policy and infrastructure level, to ensure that Information and Communication Technology (ICT) is fully utilised for national development and economic advancement.

The overall vision of the Ministry of Public Telecommunications is the creation of a knowledge based society, which is globally competitive and productive, one that will give rise to the strategic placement of Guyana as a premier ICT hub in the region. The vision also includes an enabling environment for the creation of a viable private sector that will create wealth, employment and contribute significantly to the Gross Domestic Product (GDP).

The Ministry has had quite a number of achievements throughout the year.

On July 18, 2016, the Telecommunications Bill was passed in the National Assembly without any amendments. The Bill sets out the administration’s policy paper to effectively bring to an end a monopoly enjoyed by one agent in the telecommunication sector.

This position taken by the present Administration, confirms to its regional commitment as established in the Revised Treaty of Chaguaramas which speaks specifically to establishing an enabling environment to promote competition and fair trade.

Minister of Foreign Affairs, Carl Greenidge said that the legislation will allow other companies to ensure the local market offers a variety of services and benefits, including more mobile rates, land lines and a host of other internet related services.

One Laptop per Teacher (OLPT)

This initiative forms part of the larger Improving Digital Equity, Access and Learning (IDEAL) programme that also includes schools’ connectivity to the internet.

The programme was launched in September by President David Granger as the beginning of a process of ICT transformation throughout the education system – a system which embraces over a quarter million Guyanese.

Since the launch of the programme in September, the Ministry of Public Telecommunications, through the E-Government Agency has distributed 7,444 laptops to teachers in Regions One, Two, Five, Six, Seven and Eight which benefited all Guyanese including students, their teachers and parents, young professionals and entrepreneurs.

Minister of Public Telecommunications Catherine Hughes explained that the goal of the Ministry goes further than the laptops’ distribution in the region. She said that the ministry is working to create a series of ICT hubs across the region, where members of the communities, including teachers and students, can go and have internet access and connectivity.

The teachers were also assured that in the first quarter of 2017, the Ministry will be rolling out satellite-based internet access for the provision of better internet connectivity to the larger communities, particularly, those with a large student population.

The Ministry of Public Telecommunications hosted its first Hackathon on November 4 to 6, 2016 at the Arthur Chung Conference Centre (ACCC). It was a 48 – hour event where programmers/ coders got to compete in teams to develop applications for possible use in the public and private sectors.

Minister Hughes said the Ministry saw the Hackathon as an opportunity for young ICT entrepreneurs to be creative.

“Our people the young and not so young, can learn and earn, establish new businesses, create linkages in and out of Guyana and ultimately contribute to the drive to digitise our nation,” Hughes stated.

The team V75 won the Hackathon. The Ministry will be hosting five such events  during 2017. Hackathons are events, typically lasting several days, in which large numbers of people meet to engage in collaborative computer programming.

Minister Hughes described the visit to China as an exceptionally successful “fact finding mission.”  The Minister said that the visit afforded the team several opportunities which included meeting with key officials of Huawei, a reputable global company, to discuss all aspects of the ongoing maintenance and expansion of Guyana’s US$32M E-Government network, and to explore opportunities for training – creating new skills and upgrading existing technological talent.

In addition, the team participated in “Huawei Connect 2016”, a three-day global integrated technology conference in Shanghai, which attracted about 20,000 ICT leaders and experts from over 120 countries. The conference provided a platform for the leaders in the ICT industry around the world to view the latest technological developments in action, and to attend information workshops on cutting-edge solutions such as Cloud Computing.

This has seen several Ministries and agencies being added to the E- Governance project in the year 2016, according to Minister Hughes. She said that the objective is to improve the quality of social services, to fight crime, to boost the standard of education, to promote digital literacy, and provide an ICT path. 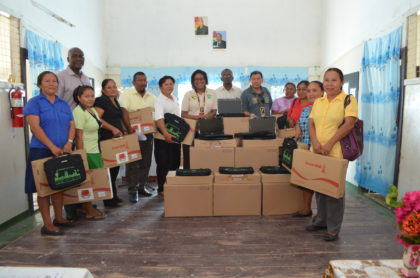 Teachers of Aishalton pose for picture with Minister of Public Telecommunications, Catherine Hughes and Minister of Indigenous People’s Affairs, Sydney Allicock after receiving their laptops 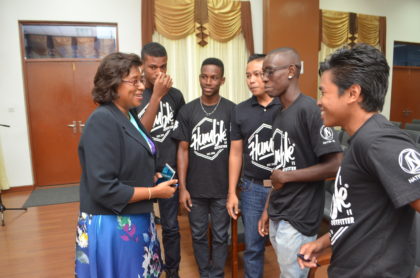 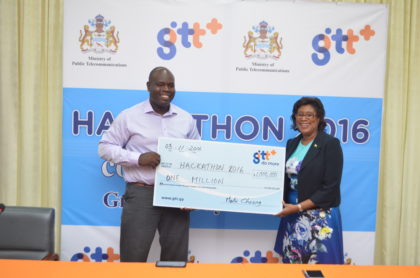