Longstanding employees of the Ministry of Communities were on Wednesday evening honoured for their selfless contribution to local government and the public sector.

The award ceremony was held at the Arthur Chung Convention Centre.

Following Richmond in years of service was Diane Critchlow, who after 35 years is still rendering her service in the local government system. Critchlow who began her journey in the public sector in 1983, served in a number of financial positions at various councils. She is currently the Town Clerk of the Anna Regina Town Council. She was followed by Ackloo Ramsudh and Audrey Nelson, who have given 33 and 31 years respectively to the system of local government. 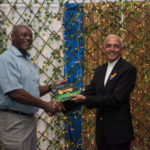 For regional service, Maureen Ward from the Regional Democratic Council of Region Six was honoured for her more than 30 years of diligence in the system. She began her journey in 1980 as an accounts clerk. She is also a District Development Officer 1.

With 30 years of service too was Ismay Joseph who has been working at the Patentia Neighbourhood Democratic Council since 1998. She is currently the overseer of the council.

Featured for their longstanding and outstanding service were Glennis Castello with 30 years under her belt at an NDC. Myrtle Christian and Chandroutie Bhagwandas also gave some 27 and 25 years respectively to the local government along with Danieram Singh and Samuel Sooklall who both have served 25 years.

Within the region, Denis Jaikarran was lauded for his 20 years in the system.

For outstanding municipalities, the Mayor and Town Council of Bartica was awarded for its leadership in implementing the green agenda. Mayor Gifford Marshall received that award on behalf of the council.

Meanwhile, the Mayor and Town Council of Lethem was awarded for its improvement in solid waste management.

Minister of Communities Ronald Bulkan also received an award for what employees noted was the transformation brought about within the Ministry itself and local government on a whole. Permanent Secretary Emile McGarrel was also awarded.