(Georgetown, September 11, 2017) – Over the years the National School of Music has expanded its offerings to 30 students and teachers in the music industry. The teachers will be drawn from Georgetown and Regions 2, 5, 6 and 10.

This effort has been expanded with the start of an Electronic Music Production course offered by the Music School with support from the Basic Needs Trust Fund (BNTF). 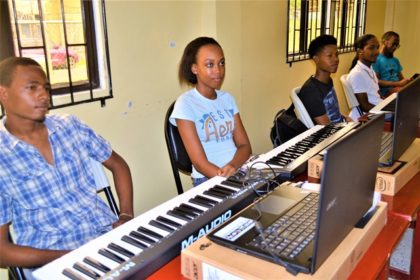 “We realise that the creative industry is an expanding one in Latin America, the Caribbean and further afield where the GDP is 15.7 percent…so we though that providing our young people with the necessary skills and knowledge, we are giving them the advantage of tapping into a growing and expanding industry,” Andrew Tyndale, Coordinator of the National School of Music stated.

He added that it is important to have this group ready when the creative industries take off in Guyana.

In recognition of the fact that many of the students are excited to produce music for themselves and others, Tyndale emphasised that this course opens many other avenues for income earning.

In this regard, he implored the students to attend the class regularly, punctually and to take in as much as possible. As an added benefit, at the end of the course, students will be attached to Kross Kolour Records, Vision Sounds and NCN. This will allow for hands-on experience.

This unique course is a follow-up course to another which focused on formal music education in guitar and the harmonium, among others.

The Electrical Music Production course is unlike any other as it fits into the BNTF’s mandate of promoting entrepreneurship among Guyanese youths.

Mrs. Simone Kellman-Washington, Community Liaison Officer – Basic Needs Trust Fund, in her remarks, gave an overview of the work of the organisation which receives funding from the Caribbean Development Bank through CIDA for the execution of projects in Guyana. Some of these projects include the construction of schools, water supply, health centres, roads; and most recently the provision of skills training.

Kellman-Washington explained that this shift towards skills training came about after the Head of State, President David Granger emphasised the need for young Guyanese to receive skills training that will prepare them for the world of work and at the same time empower them to start-up and own their own businesses.

Importantly, this unique course is modelled after the Berkley style of music education and is certified by the Institute of Creative Arts.

Over the next three months, the participants will go through their studies under the tutelage of Mr. Burchmore Simon. He explained that this is a fast-paced course that is performance driven.

Simon noted that the course will challenge the creativity and technical skills of each student. 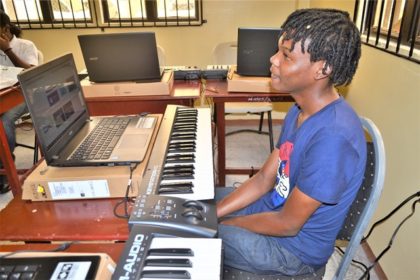