The National Assembly at its final sitting last evening, before the recess approved a supplementary budgetary sum of $306,716,110 for the Ministry of Agriculture as part of contingency funds advanced for the period ending July 28, 2016.

The amount approved represents a sum of $234,716,110 as provision for expenditure associated with the National Drainage and Irrigation Authority’s (NDIA) un-budgeted expenditures related to the prolonged dry season, El Nino, which affected several regions across the country and the sum of $72,000,000 for the Mahaica Mahaicony Abary Agricultural Development Authority ($42,777,905) and the Guyana Livestock Development Authority, ($29,222,095).

According to the justifications presented, $156,477,110 was used for the acquisition of fuel and lubricants; $36,000,000 for maintenance of equipment and $21,530,000 for the transport of equipment to various sites across the country, $8,140,000 for the provision and operation of tractor pumps, $4,489,000 for excavation works, and $8,080,000 for procuring fuel drums, stop logs and other works related to the alleviation of hardships associated with the weather condition. 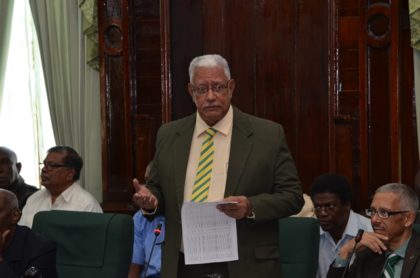 Addressing the House on the need for the supplementary provisions, Minister of Agriculture Noel Holder explained that the problems which necessitated the additional expenditure were two – fold, relating to the prolonged El Nino which affected Regions 2, 3, 4, 5, 6 and 10, coupled with the subsequent  increase in rainfall which resulted in flooding in Region 5. This required urgent intervention given it’s a prime  farming area.

“The sums were expended to prevent further losses and damage in the agriculture sector,” Minister Holder said.

Further, the Minister explained, “What happened in Region 5 is that essentially two of the pumps at Trafalgar were vandalised during the previous administration and were not fixed for two years.  They were not available to help with the flow of water to drain off Region 5. While there was drainage at Profitt and D’ edward villages, the main one at Trafalgar was not functioning. The result was … certain villages essentially Trafalgar, Union and Tempe became flooded after the rainfall,” explained Minister Holder to the House.

Responding to questions posed by members of the opposition benches, the Minister said, “as a matter of fact some of the problems could not have been anticipated, for example the  movement of salt water nine miles up the Mahaica creek. We had to divert water from the … creek and dig a canal four miles long to get water to farmers in the Mahaica area.. these are extra ordinary conditions.. this is the rational for it.”