With assistance from the United States Agency for International Development (USAID), the Ministry of Public Health, this morning, officially launched a campaign to eliminate lymphatic filariasis.

Leading by example was Minister of Public Health, Hon. Volda Lawrence who took the set of pills to combat the parasitic disease.

Minister of Public Health, Hon. Volda Lawrence was the first to take her pills to combat lymphatic filariasis. 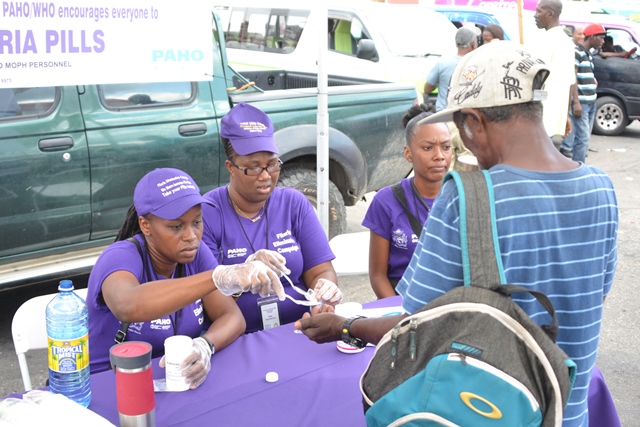 A citizen takes his pills. 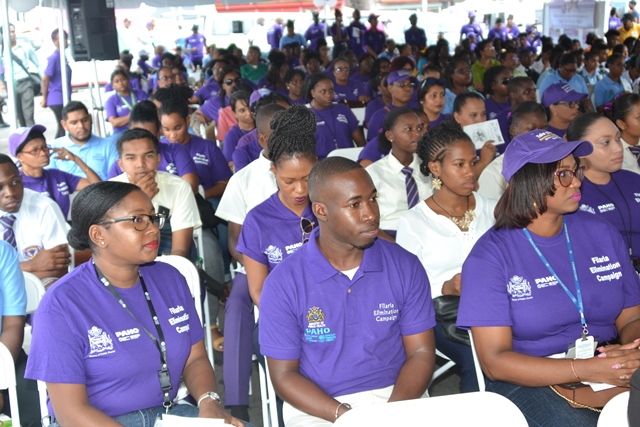 A section of the audience at the launching on Thursday. 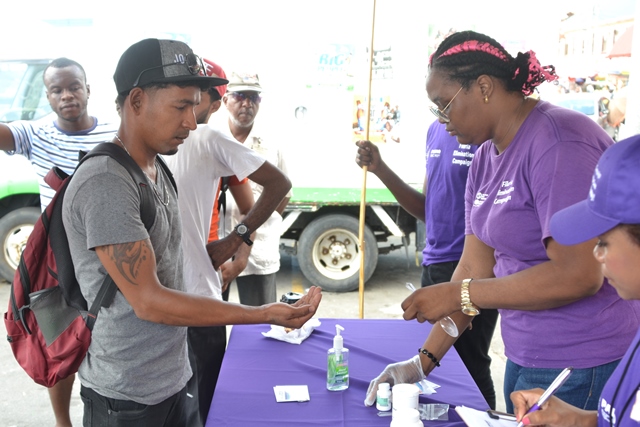 A citizen takes his pills.

The official launch of the Mass Drug Administration (MDA) was held at the Stabroek market square. The one-month exercise will see health officials visiting homes and schools to administer the drugs.

According to Minister Lawrence, Guyana has made tremendous progress in the fight against filaria. However, the objective is for the elimination of the disease.

“We do not want persons within our communities to suffer this fate. That is why collectively, we have agreed to step up this campaign and to work together assiduously to combat and eliminate this often-neglected disease.”

Lymphatic filariasis is reportedly a leading cause of permanent disability worldwide. Also known as elephantiasis, the disease is spread by blood-feeding diptera such as mosquitoes. The bite of an infected Culex mosquito deposits tiny worms called microfilariae in the bloodstream. The result is permanent swelling to legs, breasts, arms and scrotum, among other bodily parts.

Minister Lawrence said the elimination campaign, which is a continuation of work started years ago, is built on the mass drug administration, morbidity management and disability prevention.

“Guyana has made tremendous progress in recent years, in the roll-out of the mass drug distribution. We have been able to net a coverage of 85% and our hats are raised to those persons who took the medication to our people, across the length and breadth of Guyana.”

In 2000, over 120 million persons were affected worldwide, with some 40 million disfigured and or disabled by the filariasis.

Except for Regions 8 and 9, the Public Health Ministry is currently working in all the administrative regions. Minister Lawrence reported that a survey carried out found that the Potaro-Siparuni and Upper Takatu-Upper Essequibo regions are not affected by the disease.

Country representative for the Pan American Health Organisation (PAHO) Dr. William Adu-Krow said while the prevalence of the disease has fallen significantly, it must be eradicated.

Pregnant women, severely ill persons, and persons shorter than 90 cm are ineligible for the drug distribution.