The 45th regular session of the Council for Trade and Economic Development (COTED), opened today at the Marriot international hotel. The meeting will seek among other things to pursue policies that would safeguard the economic strength of CARICOM Member States, especially in the face of the recent devastating hurricanes. 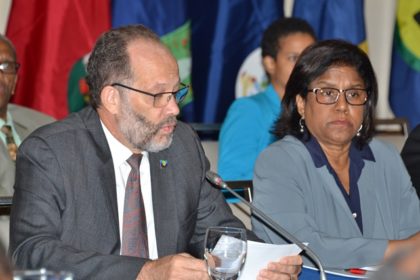 CARICOM Secretary General Irwin LaRocque addresses Ministers of Trade at the 45th Session of COTED at Marriot hotel. Next to him is COTED Chair Paula Goopie-Scoon.

The destruction wrought on several Caribbean countries back in September by hurricanes Maria and Irma has put at risk efforts to stimulate growth and development.

This is according to CARICOM Secretary General Ambassador Irwin LaRocque during his address at the opening of the confab.

According to him, the economic impact of the hurricanes is not limited to the affected countries but extends to the wider Caribbean given the level of integration shared.

“Agriculture, tourism, manufacturing, housing, infrastructure, energy, and communications have been adversely affected in varying degrees in the countries battered by Hurricanes Irma and Maria… Even as relief efforts continue, the task of reconstruction and rebuilding must get underway.  This is critical not only to re-energising the economy but also to provide for the social needs of the people as they recover from a traumatic experience,” Ambassador LaRocque told the meeting of Caribbean leaders.

He said the main responsibility of COTED is to ensure that the trade and economic policies of the community are supportive of growth and development in member states.

The Secretary-General also spoke of the need for a broader objective to assist the entire Community to improve its resilience to adapt to the effects of climate change.

“We must prepare for the next catastrophic hurricane, flood or drought since climate change is the new normal,” he said, countries will have to strengthen their capacity to plan for that new normal. 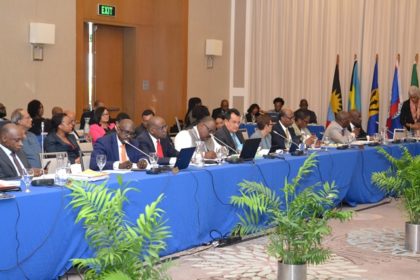 Some participants at the opening session.

According to LaRoque, as countries of the Caribbean grapple with the seriousness of their vulnerability to catastrophic events, the Council will be required to lead in promoting sound policies that will help to strengthen our economic resilience.

“Our Strategic Plan places great emphasis on the CARICOM Single Market and Economy (CSME) as our chosen vehicle in that regard. And correctly so. However, given the reality of the new normal, brought on by the effects of climate change, we need to ask ourselves: is it sufficient? We need to look at our economic sectors and consider ways of making them more resilient to these external shocks,” he said.

CARICOM, with the support of the United Nations (UN), will convene a High-Level Pledging Conference on November 21, at UN Headquarters in New York seeking the co-operation of international development partners, the private sector, and private foundations to help rebuild the countries ravaged by the hurricanes.

Chair of the ministerial session of the meeting Minister of Trade and Industry, Trinidad and Tobago Paula Goopie-Scoon said the meeting of COTED is significant especially since the organisation was established to help member countries survive and achieve economic growth in a turbulent global economy.

“As small economies, we must embrace the role of the COTED as stated under the revised Treaty of Chaguaramas. We must aim to deepen the CSME to realise the full benefits of the Treaty.”

Goopie-Scoon said it is especially necessary for member countries to establish and promote measures to enhance productivity and accelerate diversification from existing economies into new frontiers.

The two-day meet will cover a wide range of issues. From the crafting of the internal relationship and the implementation of Caribbean Single Market and economy to the coordinated approach to the external economic and trade relations and the strategic directions to the economic growth of the region.

It will also include matters relating to the development of a Public Procurement Protocol.

On the international front, Ministers will be discussing matters relating to external trade, in particular, the decision last year by the United Kingdom to leave the European Union.