The Embassy of the People’s Republic of China has donated equipment to the Guyana Table Tennis Association (GTTA) to benefit 50 primary and secondary schools countrywide.

The equipment includes tables, nets, rackets and tennis balls. His Excellency Cui Jianchun, Ambassador of China to Guyana, made the handover to the GTTA on Thursday.

The ambassador said that while thinking about how he could contribute something of significance to Guyana, he thought about his own country and how he could share Chinese culture with Guyanese.

Ambassador Cui added that the ceremony was not just a handover, but also the sharing of something that meant a lot to his country with Guyana.

He also acknowledged Guyana’s recent successes at table tennis and expressed his eagerness to see the equipment used to boost the country’s performance in regional and international competitions. 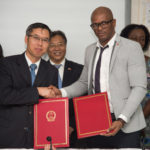 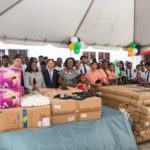 Diplomats, Members of the Guyana Table Tennis Association, Teachers and Students pose with some of the equipment donated 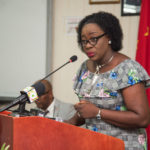 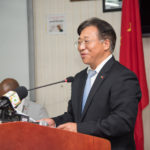 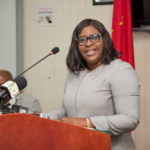 Minister of Foreign Affairs, the Hon. Dr. Karen Cummings stated that the donation was another step in forging a closer bond between the two nations.

“The strong desire of the ministry is that today’s undertaking would constitute the first platform for continued close collaboration between Guyana and China and enhance ping-pong diplomacy,” Dr. Cummings said.

Meanwhile, Minister of Education, the Hon. Dr. Nicolette Henry, thanked the ambassador and people of China for the donation, noting it was a timely one.

“I have to say that this table tennis equipment is very timely since we are currently focusing on the holistic development of our learners. And as you know, we are also in the process of reviewing the curriculum. This, of course, is more in keeping with the students’ ability their interests, best practices and more global demands.”

Physical Education teacher at Presidents College, Willon Cameron told DPI that the act by China would undoubtedly help the progression of sports at the school.