$8.1M in Jubilee grants handed over to several indigenous communities

Residents of several indigenous communities in Region One over the weekend received Jubilee grants to start projects of their choice. The grants are a part of the government’s effort to help develop hinterland communities. 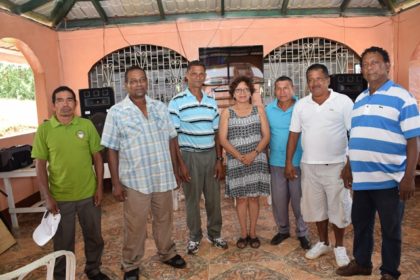 The Minister reminded the village leaders that the government is committed to supporting their communities and the projects that are identified to benefit the entire community. The Minister said that she is pleased to know that the communities were able to come up with plans on how they are going to spend the money.

However, the Minister advised the Toshaos to encourage residents of their communities to be more involved in the decision making process when formulating their project ideas.

Minister Lowe said that development of indigenous communities remains high on the Government’s agenda. She urged the Toshaos to take pride in the project they embark upon and warned against carelessness. “We want you to care whatever you have received, that way, you can always have for a long time. So when you apply another time you can show that I have received this and look it’s still working,” the Minister said.

The sum of $280M was allocated to the Ministry of Indigenous Peoples’ Affairs to aid 212 indigenous communities’ to facilitate projects that will benefit residents of the communities.

During the recently concluded National Toshaos’ Conference in August, 2016, $2.5M was handed over to two indigenous communities in Region Nine.