Eight-year-old Thalesh Singh of La Grange, West Bank Demerara, was earlier on Tuesday fitted with his hearing aid and given the sign of approval by doctors and health workers.

The lad, who has had difficulty hearing since he was born, was brought to the distribution exercise hosted by the Ministry of Public Health and Starkey Hearing Foundation, by his father and grandmother.

As he was being tested and fitted, then re-tested again with his hearing aid, the eight-year-old was no doubt unaware that the First Lady of Guyana, Mrs. Sandra Granger stood behind him observing every move of the proceeding. 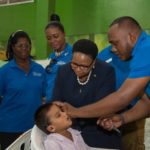 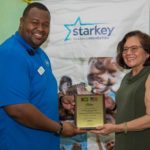 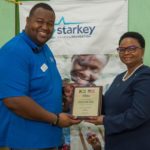 Mrs. Granger, during a trip overseas a few years ago, met members of the foundation, and after hearing of their work, relayed her interest in having them collaborate with the Ministry of Public Health in Guyana.

Fast forward to 2020, and it is the third such collaboration between the state agency and the international foundation created by William F. Austin in 1984.

During today’s exercise, approximately 150 persons from various parts of the country will either receive new hearing aids or replace old ones.

Speaking with the Department of Public Information, (DPI), Minister of Public Health, the Hon. Volda Lawrence relayed that witnessing little Thalesh being fitted with his hearing aid was very touching.

“I am happy about this collaboration between Starkey and the Ministry of Public Health. He is an eight-year-old, he has missed so much, but I thankful nonetheless for what we have been able to do through this collaboration,” Minister Lawrence stated.

The Minister made it clear that the exercise was not restricted to Georgetown alone. “We’ve been able to touch lives in several of our regions, including our far-flung regions,” she stated.

On Friday the exercise will be taken to Lethem, Region Nine.

Guyana’s expertise in the area of audiology will be in full use during the exercise. Dr. Ruth Queicoe, Audiological Physician and head of Audiology in the country, relayed that all of the ministry’s trained personnel from all the regions will make their way down to assist.

Dr. Queicoe also said the ministry also conducts a follow-up clinic with patients once a month.

Another incredible outcome of the collaboration is the fact that Guyanese trained personnel are now invited to travel along with the international foundation for clinics and medical outreaches.

“Because Guyana is the only country that has a real audiology system set up, they requested that our staff accompany them to fit hearing aids in other countries; like St. Kitts, St. Lucia, Antigua and so on. Our staff are the trained personnel and the others, are volunteers, they have no audiology knowledge.’ Dr. Queicoe explained.

Tuesday’s distribution exercise was held at the Cliff Anderson Sports Hall in Georgetown.