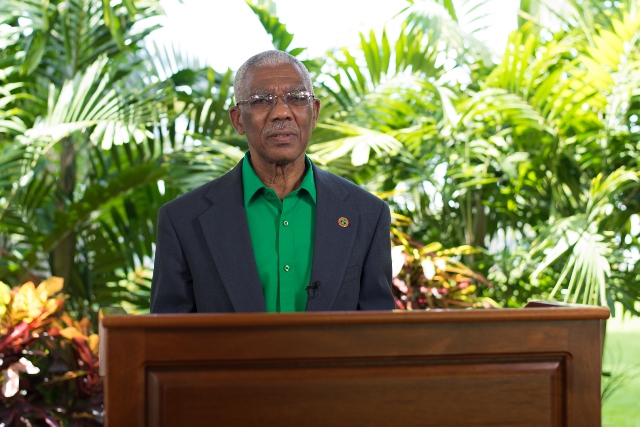 His Excellency, President David Granger during his address to the nation on the massive increase in public servants’ wages.

Additionally, the increase will be retroactive from January 1, 2019.

In addition, they will get more than a month’s salary, given that the 9% increase is retroactive for 12 months.

Making the announcement today, His Excellency President David Granger said public servants provide public goods which benefit everyone and every sector of the economy.

“The APNU+AFC Coalition is committed to creating a proficient, professional, highly-motivated and well-paid public service. Your government is committed to good governance and ensuring that all Guyanese can enjoy the good life,” the Head of State said in a public address.

At the same time, public sector workers currently within the $100,000 to 999,000 brackets will see an 8.5% increase in their salary while those earning above that amount will get a 3% increase.

The increases to salaries this year have taken a quantum leap from previous years. Last year, the scaled salary increases ranged from 7% for persons making under $100,000 to 0.5% for persons earning more than $1M.

The Head of State also announced some significant increases to varying allowances.

The president noted that increases in salaries and wages have positively impacted the performance of public servants themselves, their households and on the national economy as a whole.

“Public Servants have received annual increases in their wages and salaries consistently since 2015. Personal allowances have increased significantly, the income-tax rate was reduced and the tax on employee’s contribution to NIS was removed, over the last four years,” the Guyanese leader stated in his address to the nation.