− Coalition Administration is committed to democracy and local governance

The APNU+AFC Coalition Government reaffirmed that it remains united and strong and committed to democracy and local government.

In a joint press conference hosted today, the APNU+AFC Coalition said the results of the recently concluded Local Government Elections (LGE) demonstrates a victory for not only the Coalition but the people of Guyana.

The Administration said it’s even more resolute in its efforts to realise the ‘good life’ for all Guyanese.

Prime Minister, Moses Nagamootoo, who is currently performing the functions of President, said it is time for the shedding of political partisanship. 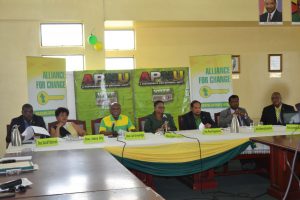 Prime Minister, Moses Nagamootoo who is currently performing the functions of President, and other members seated at the head table 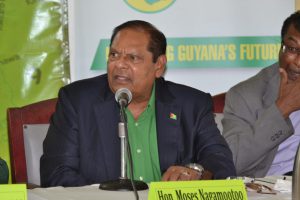 Prime Minister, Moses Nagamootoo who is currently performing the functions of President 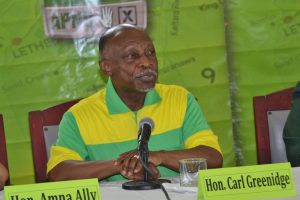 Minister of Foreign Affairs, Carl Greenidge who is currently performing the duties of Prime Minister

While congratulating the newly elected representatives, the Prime Minister said Central Government will continue to work with all the elected municipal and Neighbourhood Democratic Councils (NDCs) to improve the lives of residents at the community level throughout the country.

“The successful candidates now have an opportunity to participate and to lead in the process of the renewal of their communities and to continue the reversal of the decay that had beset may of our NDC’s as a result of the near collapse of the local government system during the two decades of neglect by the Peoples Progressive Party,” he noted.

The Coalition also reports high confidence in the Guyana Elections Commission (GECOM) for its efficient execution of the LGE. This, it noted, validates the commission’s capacity to hold free and transparent elections.

Minister of Foreign Affairs, Carl Greenidge, who is currently performing the functions of Prime Minister, said the LGE was a clear demonstration of the democratic renewal that has been ushered in by the APNU+AFC administration.

He noted, “APNU and the AFC remain steadfast in our commitment to democracy and local governance and to empowering our citizens in accordance with the Constitution of Guyana, to freely exercise their right to elect representatives of their choice to local councils.”

Further, the Coalition Government is committed to ensuring that the three levels of government: central, regional and municipal, through regular General and Regional Elections and LGE, complement each other and can begin to work for the common good; rather than against each other.

Monday, November 12, marked the second time in the history of the country that Local Government Elections (LGE) was hosted consecutively when they are constitutionally due.