The communities of Aranaputa, St. Ignatius, Sarariwarau in Region Nine, Upper Takutu-Upper Essequibo received tractors and trailers each to boost their agriculture initiatives. The equipment was handed over by Minister of Indigenous Peoples’ Affairs, Sydney Allicock over the weekend.

At the presentation ceremony held at the Aranaputa Community Ground, Minister Allicock emphasised the need for residents to utilise community resources for the benefit of all the people and not just a few.

“…For too long we have been hearing about just a few persons receiving contracts and being allowed to use community vehicles and other assets. We have village councils not accounting for assets and cannot update their books. Everyone must be part and parcel of the investment the government has been pumping into these communities.” 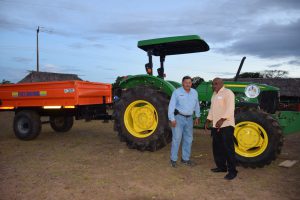 Minister of Indigenous Peoples’ Affairs, Sydney Allicock handing over the keys to a tractor to Toshao of St. Ignatius, Dennis Benedict 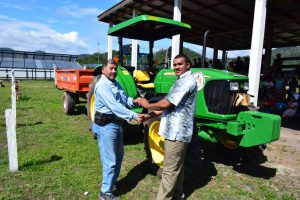 Minister of Indigenous Peoples’ Affairs, Sydney Allicock handing over the keys to a tractor to outgoing chairman of Aranaputa, Adon Jacabus

Minister Allicock urged the residents to continue to farm and develop their respective products.

He also used the opportunity to outline some of the projects for the new year that has been catered for in the 2019 National Budget. Of the $1.9 Billion allocated to the Indigenous Affairs Ministry, $36 Million will be expended for the Indigenous Languages Project, $235.3 Million for green sustainable projects in 215 communities under the Presidential Grant programme, $176 Million for support to HEYS students, $15 Million for an agro-processing facility in Annai and $56 Million for the Bina Hill Institute.

Minister Allicock explained that a pilot solar farm project will also be implemented in Annai to supply 24-hour  electricity to the community and the surrounding areas.

“Over $300 Billion was approved in Budget 2019, the largest ever and we are catering a lot for Hinterland development. We want to ensure there are proper roads, communication, airstrips, transportation and health and education. But you also have a role to play in this process, it is about you and your children and we need your support. We want you to have economic strength.”

Minister Allicock indicated that funds were also allocated for the completion of the Green Enterprise Centre at Bina Hill and urged the people of the North Rupununi to prepare to make full use of the facility.

Kenneth Forde, Aranaputa Councillor said that the government have given to Aranaputa the right tools that will help the village get back to be the leading agriculture producing village in the Rupununi.