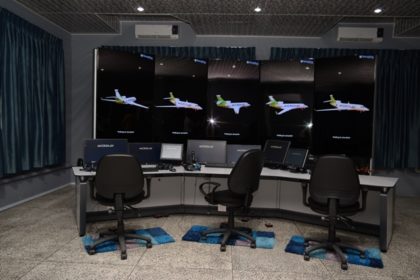 View of newly commissioned flight simulator room set up in the control tower at CJIA.

Minister within the Ministry of Public Infrastructure, Annette Ferguson said that civil aviation must also develop as Guyana develops; therefore, the government has invested in both training of air traffic controllers and the provision of equipment and systems to facilitate those training.

“GCAA invested $85M to procure this state of art equipment with features such as position for tower, ground and radar controllers, three pseudo pilot also 180 degrees display with ability of 360 degrees in 72 monitors and recording and playback of audio and video for training exercise…this expensive equipment would not have been achieved without a formal and certified institution to carry out such training,” Minister Ferguson explained.

The civil aviation training school formerly known as Air Navigation Services was originally established in 1979 and was approved then by the International Civil Aviation Organisation (ICAO) as an Approved Training organisation (ATO).

Minister Ferguson highlighted that although the school failed to keep its ICAO certification, it continued to provide 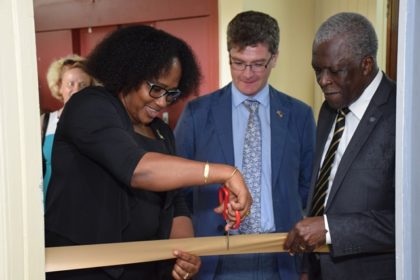 Minister within the Ministry of Public Infrastructure, Annette Ferguson, flanked by British High Commissioner to Guyana, His Excellency, Greg Quinn and Director General, GCAA, Retired Colonel Egbert Field as she cuts the ribbon to commission the brand new simulator for GCAA.

training to ICAO’s standard. However, the certification process means that the institution would now be able to offer courses approved and recognized by the international civil aviation industry, Minister Ferguson noted.

Former Acting Director, GCAA, Chaitrani Heralall, who initiated the idea of having the simulator, stated that in 2009 when GCAA started the air navigation services modernisation programme it became critical to have a simulator that is comparable to the operation environment to reduce the gap between training and operations.

Heralall pointed out that GCAA has been successful in acquiring the simulator after trying for many years. She said, “I’m very pleased that all the hard work has paid off and the government has provided the funding for the simulator.”

Director General, GCAA, Retired Colonel Egbert Field is also proud of the accomplishment. He indicated that training costs the institution millions of dollars; this year some $113M was allocated for training. He is confident that with the certification of the civil aviation training school training costs will now be affordable.

“I’m happy that the two main items simulator and training school have been completed and will continue the work done by civil aviation authority…It (training school) will commence training with the normal air navigation services but as we develop more courses they will fall under the umbrella of the school which will include safety management systems, dangerous goods training and other courses which relates to aviation,” Field underlined.

The training school and the simulator will enhance Guyana’s capacity to produce more trained and skilled personnel in the aviation sector. 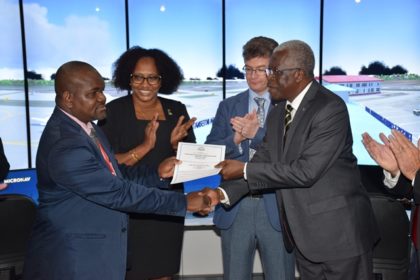