The Ministry of Social Protection on the 14th February, 2017 held an award ceremony for winners of the Break the Silence Challenge. The top three competitors won prizes for a valentine’s night dinner, each at one of Guyana’s leading dining establishments. The dinners are inclusive of a $5000 spending limit for drinks. The top three winners were all married couples. In addition there were 10 consolation prizes. 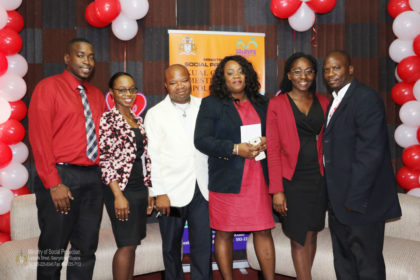 The competition encouraged participants to make a pledge to their partners not to abuse each other.  It is one of the Ministry’s more social attempts in the fight against gender-based violence.   In her introduction, Ms. Akilah Dorris, Head of the Sexual Offenses and Domestic Violence Unit, congratulated the couples and encouraged others to keep an eye out for more activities from the Ministry in an effort to raise awareness on the issue of domestic violence.  Ms. Dorris posited “We know there are no perfect relationships and every couple experiences challenges along the way, however we know there are couples that would have overcome their challenges while maintaining healthy and happy relationships”.

The competition saw a large amount of likes and shares, with competitors even tagging friends within the comments section of the various posts to gain more likes.

When asked what prompted her to enter the competition, Mrs. Husbands said that although she is not a person who is very inclined to a lot of social media activity  she thought it is a really good activity that the Ministry was promoting  and she was convinced that she too needed to be an advocate.  Mr. Husbands encouraged men to listen to, love and respect their spouse.

Mrs. Johnson who copped second place, when asked about her message to couples, said that “your partner should be a part of you and hurting that person is just like hurting yourself”, she further stated “if you’re seeing red flags, you should not stay in that relationship”. Mr. Johnson urged couples to be mature and said that arguments are healthy once dealt with in a mature and correct way.

First place winner Mrs. Onwuzirike said that she entered the competition to assist in sending out a message against domestic violence.  She encouraged couples to put God at the center of their relationship and respect each other. Mr. Onwuzirike echoed the sentiments of his wife and said that it is important to communicate the message of non-violence at all levels.  Mr. and Mrs. Onwuzirike have been married for over 16 years.

In his closing remarks Mr. Whentworth Tanner, Director of Social Services, chronicled the story of St. Valentine and said that it is an important example in showing that when you love someone you go out of your way to protect that person and not do harm them. He said that, that is the message the Ministry has been trying to achieve. 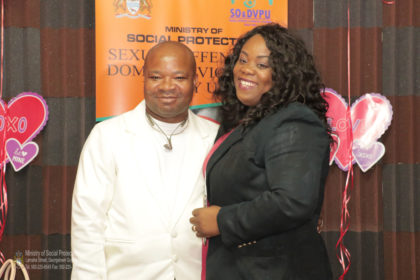 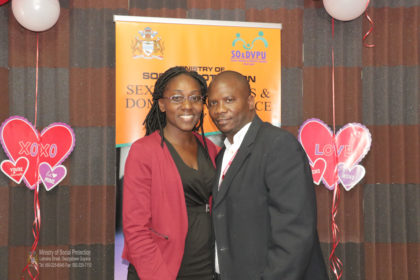 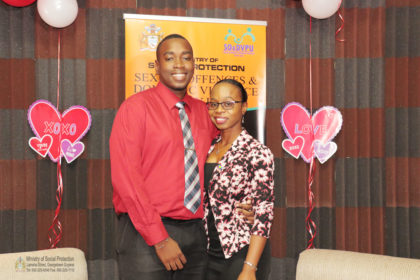