Leaders of the Bartica Municipality including the Mayor, Deputy Mayor, Town Clerk and councilors today paid a visit to the Attorney General and Minister of Legal Affairs Basil Williams to seek advice pertaining to a legal matter involving a businessman. 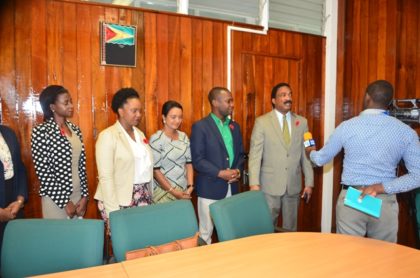 Attorney General and Minister of Legal Affairs, Basil Williams briefing the Department of Public Information on the meeting with the Mayor of Bartica Gifford Marshall and Town Council.

In 2013, an order was made against the Neighbourhood Democratic Council (NDC) which required payment be made to the businessman in the municipality.

Since attaining township, the Mayor of Bartica Gifford Marshall said the municipality is faced with complying with an order that it inherited from the NDC.

Marshall said that stemming from the meeting, the Attorney General is committed to assisting the municipality with the matter.

Deputy Mayor Nageshwari Persaud observed that with Bartica being a fairly new municipality, seeking the Attorney General’s advice on the way forward was the most appropriate action, since the matter is presently engaging the courts.

Persaud pointed out that with the matter being in the courts, “it would affect the resources of the municipality. That is why we are here today to seek the relevant help to ensure that when we move into 2018, we are able to clear all of the legal matters that would have been affecting us.”

Town Clerk Phebe Wallerson also expressed gratitude to the Attorney General for his support in the matter. She stated that “as a new municipality, there is a lot that we do not know and we do not know the right procedures to follow to ensure that justice comes for everyone involved. So, we are thankful to Attorney General and his office for considering us …and also …helping us to resolve the issue.”

A detailed report on the matter is expected to be in the hands of the Attorney General by November 10, 2017.