Despite the split between the two factions of Guyana that resulted in some folks celebrating Diwali on Wednesday and others on Thursday, Berbicians had a blast for Diwali. 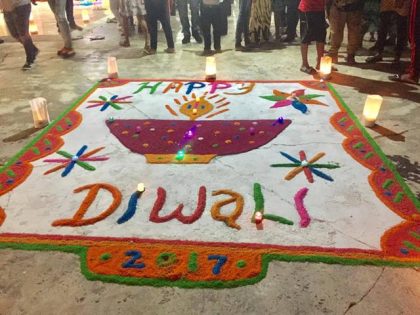 A Rangoli welcome guests at the Miss Phoebe Mandir.

Hindus, for the most part, spent the auspicious occasion fasting during the day and making sweetmeats to share with their neighbours and relatives. As the evening dawned many were busy pouring oil into their diyas and lining them along the walkway and outline of their homes.

As the darkness set in, they lit their diyas and turned on their colorful lights. Many found innovative ways of battling the age-old problem of having to relight their diyas due to the wind. The most common was to place a little sand in the bottom of a paper bag and place the diya inside, then lighting it, the end result is a lanternlike effect created by the flame from the diya in the bag. Others chose a modern approach and used colorful mini lights that looked like a flame, some multi-colored while some went for the traditional look similar to a candle.

True to Berbician tradition, many took their families out for an evening drive to take in the sights. Along the way, they converged at Miss Phoebe, Port Mourant where the phones and cameras came out for selfies by the Miss Phoebe Mandir. 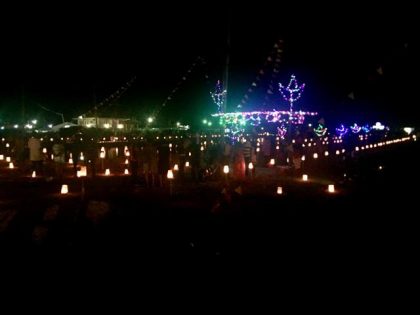 Many gathered to witness firsthand the colourful display of lights and diyas that lined the shoulders of the dam.

The members of the mandir for the past five years have been surpassing themselves by lighting over 1,000 diyas, that are then lined from the Public Road leading to the Mandir in the street. Making use of GuySuCo’s drainage canal next to the street, diyas are placed in the trench and lined along the edges, the reflection creates a picturesque scene that has hundreds flocking annually to get a glimpse.

According to Vishal Ramatalli, a young member, the preparation for the occasion takes about two weeks and the mandir uses the occasion to foster social cohesion amongst the community and different religious denominations.

“We don’t light the diyas in the mandir alone, we light it all the way to the public road so that everyone can participate and be part of the festivities. The number of people that comes to view the lights has increased every year and we hope to continue to make it bigger each year.”

Being Berbician means everyone partakes in the festivities of their friends and neighbours and Diwali is one that everyone anticipates.

From the mouthwatering sweetmeats, the infamous seven curries, lighting of fireworks to the spinning of steel wool Muslims, Christians and Hindus of all races united and had a grand time as the festival of lights was celebrated.