Biggest Party in Sports – CPL Play Off Matches Set and Ready to Go!

─ Guyanese excited about playoffs being hosted in Guyana

As Guyana prepares to hosts the two Playoff matches of the Caribbean Premier League on Tuesday and Wednesday for the first time. Captains of the four remaining teams in the tournament have all expressed excitement as they prepare to battle each other for a spot in the finals this year.

Will it be the Guyana Amazon Warriors (GAW), Trinbago Knight Riders (TKR), the Jamaica Tallawahs (JT) or the St. Kitts and Nevis Patriots (SKNP).

At a press conference today, Captain of the Guyana Amazon Warriors, Chris Green said that the team is going into tomorrow’s night game with confidence giving their recent win over the Trinbago Knight Riders. “It’s going to be a very exciting clash again and we have the hometown support which we thoroughly enjoyed this weekend,” Green said.

Chris Gayle, captain of the St. Kitts and Nevis Patriots (SKNP) noted that the team with the momentum always has an advantage.

Captain Dwayne Bravo of the Trinbago Knight Riders (TKR) congratulated all four teams, noting that “we all deserve to be here, we don’t know who is going to win the title as yet. Anyone can take it because all four teams have good players, match winners and it’s a tough competition.”

Andre Russell, Captain of the Jamaica Tallawahs, who is also a first-time captain, agreed that the tournament is now down to the four top performing teams and thanked the fans for all the “love shown”. 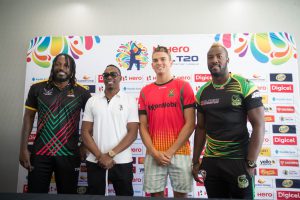 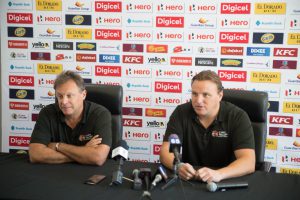 Responding to the implementation of the Decision Referral System (DRS), Bravo noted that it is a good move for the game. “Yes, throughout the season there were some unfortunate decisions by the umpires and it cost some teams and it worked in favour for others. I think it is only fair that the right tools are used especially in playoffs and it is good of CPL that they are putting it in the playoffs.

Speaking to the Decision-Making process of Umpires, Chief Operations Officer, Pete Russell noted that the Umpires are often under pressure hence the implementation of the DSR.

Each team will be allowed one unsuccessful review per innings and they will be able to review all methods of dismissal.

Russell added that the Guyana wicket has improved significantly over the last two years.

Chief Executive Officer, Damien O’ Donohue noted that attendance at CPL matches and television viewing has generally increased by 20 per cent. “I think all around the CPL fever has hit new heights all around, and we couldn’t be more pleased.”

Both the Chief Executive Officer and the Chief Operations Officer expressed pleasure and satisfaction at the performance of the young players in the teams.