The Guyana National Bureau of Standards (GNBS) is again cautioning vendors, and the public, against using the blue dial scale which is not approved for trade.

GNBS Public Relations Officer, Mr. Lloyd David said the agency has tried several ways to rid the market of that type of sale, to no avail.

“It is affecting the market place where vendors and shop keepers are using those blue dial scales to conduct trade. Those scales are not approved for trade by the GNBS. They cannot withstand the activities of trade,” Mr. David told the DPI recently. 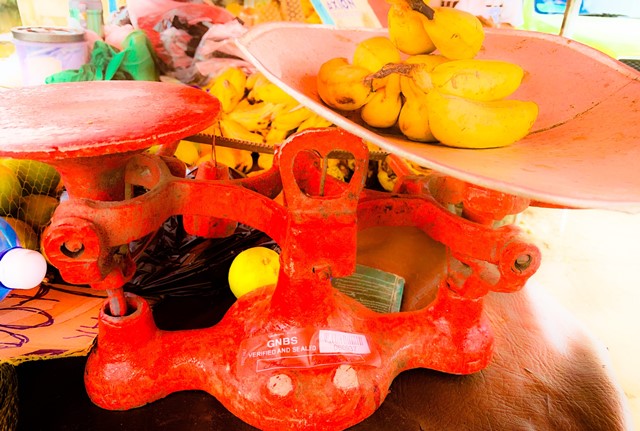 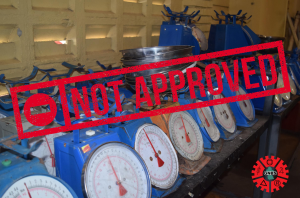 The blue dial scale which the GNBS has not approved for trade. (Photograph courtesy of the GNBS)

He explained that the GNBS has “tried urging the consumer to desist from buying from the scale and have spoken to the vendors and shopkeepers on numerous occasions to secure the approved scales to conduct trade.”

GNBS inspectors seize the scales whenever they encounter them.

“The cost of the scale is so negligible compared to the approved scale that they tend to revert and buy another scale so our task is continuous, removing those scales from the market,” he said, adding that “we have to do that because the accuracy of the scale is questionable.”

The GNBS does not verify (stamp) the scale for trade because they were designed for domestic use only. Further, the scales do not measure using only metric units, and their weighing mechanisms are not designed for continuous use and can be damaged easily when used commercially.

Therefore, instead of using the blue dial scale, the GNBS recommends the use of the red equal arm scale, the electronic scale, and the platform scale, with measurements in the International System of Units (SI Units) or metric units.

“We have made progress in some areas, but there are some areas that are still lagging behind. Use kilogrammes instead of pounds and metres instead of feet and so on,” Mr. David said.

Consumers are also reminded that they have the right to demand that items they purchase be weighed using approved weighing devices, which carry a verification seal or sticker.

“When we verify the scales, we are not in the market place all the time ensuring that the vendors do the right thing,” Mr. David noted.

He is therefore urging the public to educate themselves “so that when they go to shop, they can understand what is really happening when the vendor conducts their measurements.”

Consumers can also relay their queries to the GNBS via WhatsApp: 692-GNBS (4627).