Residents of Central Rupununi, Upper Takutu-Upper Essequibo in Region Nine are ecstatic about the government’s move to construct a road directly linking the North to the Central Rupununi into Lethem.

The proposed all-weather 70-mile long road link will start from Toka Village in the North Rupununi and stretch all the way to Kwaimatta on to Yupukari, Quatata, Kaicumbay, Fly Hill, then through Parishara, Nappi, Hiawa and into Lethem. 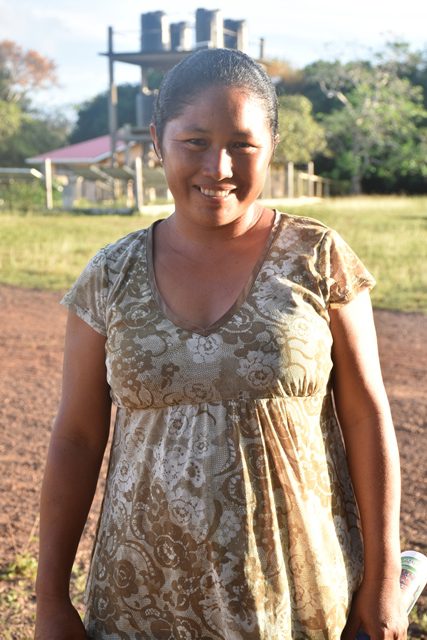 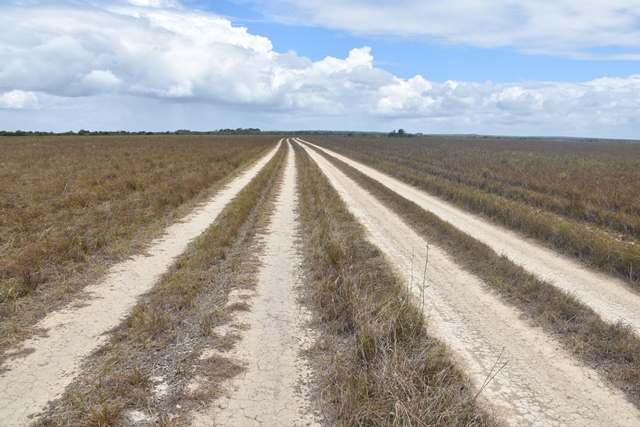 The trail linking the North and Central Rupununi. 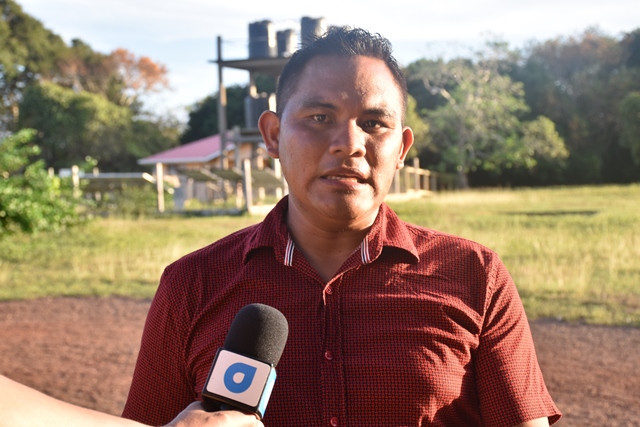 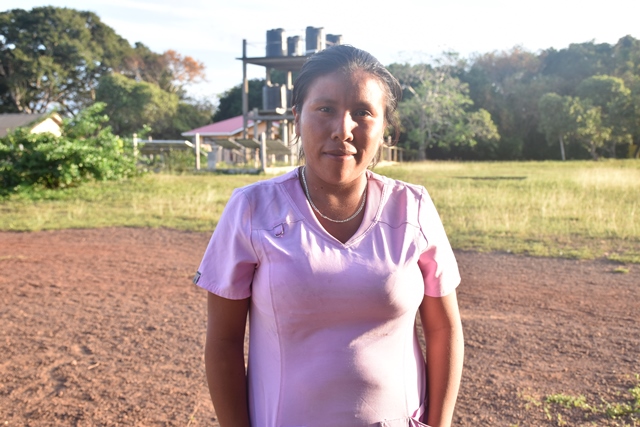 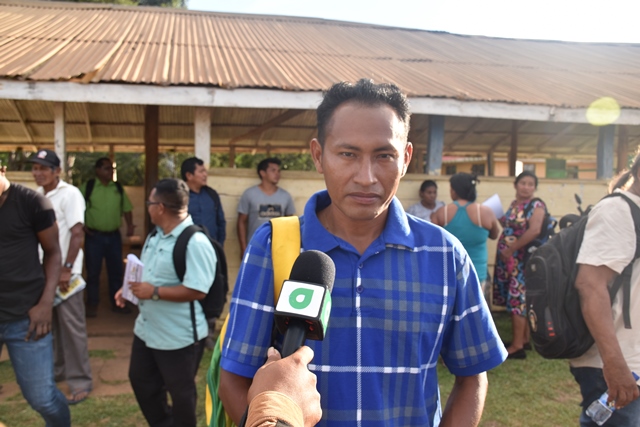 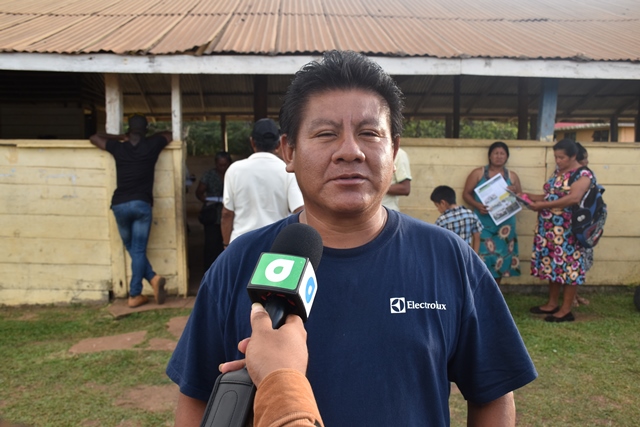 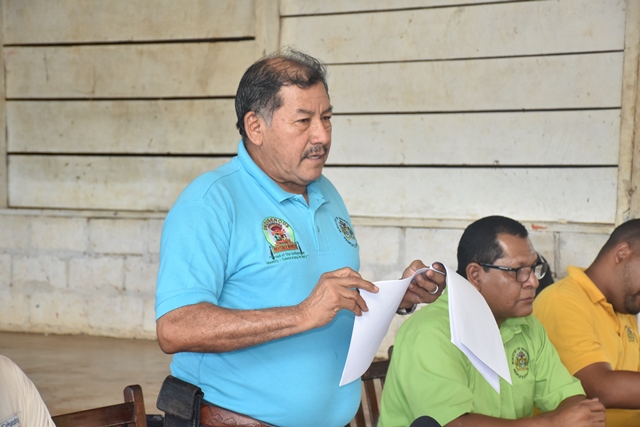 Minister of Indigenous Peoples’ Affairs, Sydney Allicock addressing the residents at the meeting at Yupukuri. 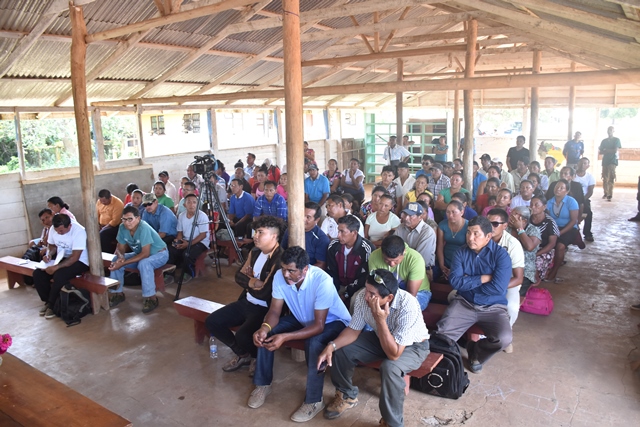 Residents gathered at the meeting in Yupukuri. 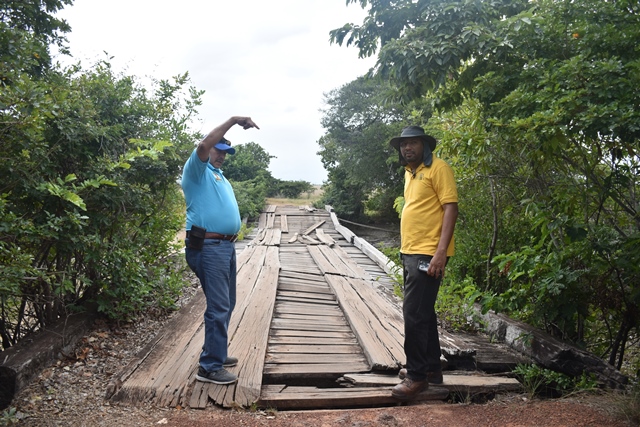 Minister of Indigenous peoples’ Affairs, Sydney Allicock along with Minister of Public Infrastructure Engineer, Raphael Lewis inspecting one bridges, linking the communities, slated to be rehabilitated.

At that meeting, held at the old primary school building in Yupukuri, all of the residents of the villages voted in favour of the road that will directly benefit some 3000 persons. They lauded the government’s effort to push ahead with such a significant project which was in talks for years.

Toshao of Yupukuri, Russian Dorrick, said this road link benefit the residents of North and Central Rupununi, as it will serve as a faster and reliable (road) access for emergency cases and to education and health services.

“For instances, there are a lot of children in this area attending Secondary School at St. Ignatius and parents find it difficult to visit the school because it takes a long time to get there. At the moment, some parents who can afford to purchase a motorcycle will go often, but there are those parents who find it hard to get there regularly. Also, the road will bring other benefits to the communities because many residents are involved in projects like the farine factory, watermelon farm and some are planting vegetables and if we have better road access, we will have significant income coming into the communities because with the road, traffic will be flowing and people will stop and purchase your items.”

Dorrick, who is also the Secretary of the National Toshaos Council (NTC) added that the communities’ tourism ventures will also be boosted since visitors staying in the region especially during the Easter holiday for the Rupununi Rodeo activities will have better access to the waterfalls, lakes and eco-lodges.

Toshao of Nappi Village, Guy Fredericks said that the road will not only benefit the Indigenous peoples from the respective communities, but also the bus services since the time it takes to reach the North Rupununi will be significantly reduced.

“Right now, we have to travel for miles to get to Lethem, which is very arduous and costly, so with the construction of the road linking North to Central and Lethem, it is going to be a great benefit and we are in full support, let progress continue and let the work begin.”

“This is what we have been waiting for, for a very long time and we are really happy that it is going to happen,” Kevin Edwards, Toshao of Kwaimatta said.

Janet Francis, a Community Health Worker of Yupukari Village is anticipating the construction of the road since it will allow her patients to travel faster and in comfort to receive medical attention at the Regional Hospital in Lethem.

Lorna Andrew, a farmer also of Yupukari said that she is especially looking forward to the building of the road since she will be able to market her produce and the proceeds of which will see her getting into large scale farming in the near future.

Minister Allicock explained that the government has recognised the importance of proper roadways in community development since it ensures better access to markets, health care, education and other economic and social opportunities, as well as bringing improved services and supplies to the now-accessible villages.

“The opening up of roads is needed everywhere, we need better roads so that your vehicles could last longer so that you will be able to access markets. so, the road will run from Lethem through Hiawa and Nappi and your airstrip can also be developed….and it will be more easily accessible and then you will see more activities in your villages, more jobs and more demand for more products.”

The project joins the list of other projects in Region Nine including the Agriculture Research Centre that is to be constructed in the Prara area in Nappi, the Hinterland Green Enterprise Development Centre at Bina Hill, Annai and the Linden to Lethem road construction.