The government is firm in its view that the proposed toll hikes for the Berbice River Bridge are “unreasonable”, said Minister of State, Joseph Harmon at his post-Cabinet press briefing today.

Minister Harmon said that Cabinet was briefed by Minister of Public Infrastructure, David Patterson on Tuesday about the issue and gave its guidance on the way forward. This included seeking legal opinions on the Berbice Bridge Company Incorporated’s (BBCI) proposals. He added that “other options” would be utilised if the BBCI insists on implementing any increases. 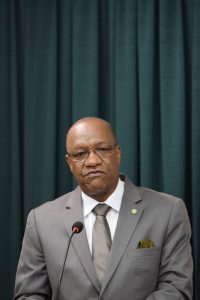 He assured that there will be no increases in tolls for the Berbice Bridge crossing, and the government will implement all necessary measures to ensure commuters can continue to traverse the bridge without undue harassment or burdensome tolls.

Earlier this week, Minister Patterson called on Berbice residents to enquire of their elected representatives, the regional chairman, members of parliament and the Leader of the Opposition, about their views on the proposed toll hikes, since there were enshrined in an agreement signed by then-President Bharat Jagdeo.

On August 21, 2018, the Cabinet approved that the Public Infrastructure Ministry, through the Demerara Harbour Bridge (DBH) company, would maintain the bridge’s 39 pontoons at a cost of $9BILLION for the remaining nine years of the concessionary agreement.

According to Minister Patterson, BBCI stated that it would need to be paid projected profits of $9BILLION to its investors, of which NIS is the largest. The contract provides for a 9 to 12 per cent rate of return, but none of the financiers was willing to reduce their rate of return nor offer to sell their shares to the government at a reasonable price. The proposed tolls rank among the highest bridge tolls internationally with a proposed 420 per cent increase.

When the government took office in 2015, it implemented river taxis for school children, pensioners, nurses and teachers and provided $155M per annum in a subsidy starting Jan 2016 to lower the toll for cars from $2200 to $1900.