The 2018 Biennial Conference of the Commonwealth Association for Public Administration and Management – CAPAM was today officially declared opened by Prime Minister Moses Nagamootoo who is performing the duties of president.

Delivering the feature address, the Prime Minister underscored the importance of partnerships and collaboration across borders to tackling climate change.

“The Cooperative Republic of Guyana is keen to collaborate with and learn from all innovative ideas at this historic juncture when we ourselves are engaged in re-orienting and re-positioning our public sector to embark on the path of a green state agenda as well as management of our environment as we develop a new oil and gas industry,” he noted.

Oil and gas, the Prime Minister noted, is the new buzz in town, and with it comes new responsibilities for the public sector.

In light of this, he pointed out that while the focus would be to develop and implement strategies to secure the better life for Guyanese citizens, the public sector has to be prepared to grapple with environmental and climate governance challenges and the green agenda as a whole. 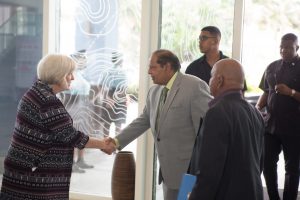 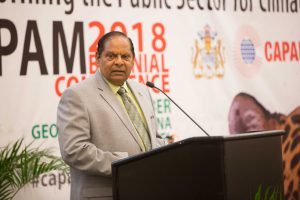 Participants at the CAPAM 2018 Biennial Conference

The Acting President said Guyana’s Green State Development Strategy (GSDS), the framework for which is being refined, offers a 20-year national development plan and serves as a mechanism for achieving the Sustainable Development Goals (SDGs) that have been adopted by all United Nations member states.

He posited, “While CAPAM will invariably play its part in assisting with transformational change and international cooperation, a sustained, local multi-stakeholder approach to any green agenda is necessary for its effective and efficient implementation.”

Further, the Prime Minister reminded participants of the important task to help countries meet the challenges of climate change, to adapt to changing circumstances and conditions, and to align the public sectors with the efforts of the rest of humanity to implement appropriate climate governance.

The conference is being held under the theme “Transforming the Public Sector for Climate Governance.”

It brings together an international network of public service managers, who will look for common ground in addressing the threats of climate change while ensuring sound economic growth.

It is being hosted at the Guyana Marriott Hotel, Kingston and concludes on Wednesday, October 22, 2018.

Minister of State Joseph Harmon, Minister of Finance Winston Jordan, Minister of Public Service Rupert Roopnarine, other government ministers and members of the diplomatic community were in attendance.