“CARICOM heads meet in Trinidad to discuss the CSME”

The meeting discussed the Single Market and Economy (CSME), which was the sole item for deliberation on the agenda, at the two-day meeting in Port of Spain. 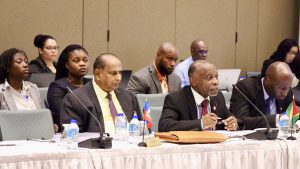 Hon. Carl B. Greenidge, Minister of Foreign Affairs at CARICOM Meeting in Port of Spain, TT

Hon. Carl B. Greenidge, Minister of Foreign Affairs at CARICOM Meeting in Port of Spain, TT

Speaking with the media, Minister Greenidge said during discussions a number of areas for potential synergy were highlighted.

“I think that was very fruitful. We have moved forward on a commitment that civil society and governments could work together at this stage and go very far with that,” Minister Greenidge said.

Efforts to fully implement the CSME, which is the hallmark of the regional integration movement, have been reignited under the leadership of newly elected Barbadian Prime Minister Mia Mottley.

Guyana, like Barbados, is in full support in creating a single economic space in the region.

However, Minister Greenidge was adamant that this arrangement must be beneficial to all States in the region.