CARICOM’s 37th Regular Meeting of the Conference of Heads of Government being held in Guyana presents an all-male cast.

The Caribbean Community (CARICOM) is 43 years old today, Monday, June 04 and there has only ever been four female Heads of Government to ‘rub shoulders’ with their male counterparts.

As the men sit in caucus to address e issues on the three day agenda, the Government Information Agency (GINA) reflects on the women and the role they played in CARICOM. 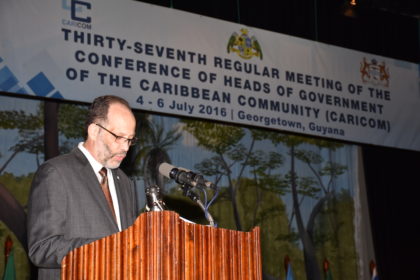 The most recent woman to serve in CARICOM was Trinidad and Tobago’s former Prime Minister, Kamla Persad-Bissessar. The seventh Prime Minister of the twin island state served her country from May 2010 to September 2015.

Persaud-Bissessar made a stir at her first CARICOM summit in July 2010 when she said that Trinidad is not the region’s “ATM card”.  Trinidad and Tobago has lead responsibility for crime and security in the region.

During her tenure in this position, Persaud-Bissessar called for a Caribbean Security Summit. The former Prime Minister was particularly concerned about the threat of terrorism to the region, especially to Trinidad and Tobago.

Persaud-Bissessar called for increased alliance with the United States to help secure the region’s borders in her address at the CARICOM-US summit in 2015. “Let us work together to ensure that ours will be a legacy of strong US-CARICOM relations and prosperity, underlined by the safety of all our people and the future of our children,” Persaud-Bissessar said in closing her address.

Persaud-Bissessar became the first Attorney General of Trinidad and Tobago and the first female Chair-in-Office of the Commonwealth. In her role as Chairperson-in-Office, Persad-Bissessar advocated for gender equality and women’s political participation.

In CARICOM, Simpson-Miller chaired the Committee on External Trade. In December of 2014 she led a delegation to the CARICOM-Cuba summit. She led discussions on trade and investment involving Cuba and CARICOM. 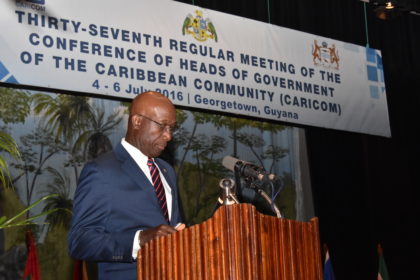 Trinidad and Tobago Prime Minister Keith Rowley giving his remarks at the opening ceremony of CARICOM’s heads of government conference. Trinidad has lead responsibility for crime and security in the region

The historic visit of the US President, Barrack Obama, to Jamaica last year was hosted  by Simpson-Miller. She was also appointed by the United Nations Secretary General in May 2011, to serve as a member of the Board of Trustees of the United Nations Institute for Training and Research (UNITAR).

In her Prime Minister Portfolio, Simpson-Miller served as public administrator for the Council of Women World Leaders, an international network of current and former women presidents and prime ministers who advocate women issues.

Then there was the late Janet Jagan, President of Guyana from December 1997 to August 1999. She was remembered by former CARICOM Secretary General, Edwin Carrington, as someone who lived for her people.

In her opening address at the fourth CARICOM- Central America meeting of Ministers of Foreign Affairs in March 1999, Jagan noted that the region must work together for a “better understanding of our special circumstances” when it comes to developing our economies.

The first female to be elected as a government head in the Caribbean was the late Dame Eugenia Charles of Dominica. Charles became the Dominican Prime Minister in 1980.

During her tenure, Charles played an instrumental part in bringing about economic programmes as Chairman of the Organization of Eastern Caribbean States (OECS).

Charles believed that CARICOM’s existence is only relevant if it is improving the lives of the people. “Therefore we must work hard at making CARICOM what it should be, what it was meant to be and what in our dignified and formal speeches we say that it is,” Charles said in an address to the eight  Heads of Government Meeting in Castries, St. Lucia in 1987.