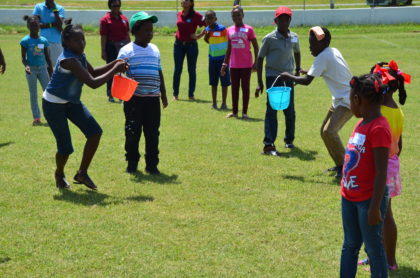 Some of the children participating in a fire drill exercise

The Civil Defence Commission (CDC) today, held a disaster preparedness camp for children ranging between the ages of five and eleven years.

The camp is aimed at teaching children the basics in what to do in the event of a disaster. The children were taught first aid training, fire safety, water, sanitation and hygiene, and solid waste management.

The one-day camp was held at Camp Ayanganna, the Guyana Defence Force Headquarters, Georgetown, under the theme “Planting the Seed for Disaster Risk Reduction and Preparedness”.

The camp is the first of its kind and was sponsored by Digicel (Guyana) and the United Nations Children’s Fund (UNICEF). 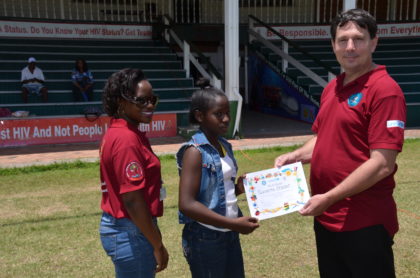 One of the children receiving her certificate of participation

Head of the CDC, Retired Colonel Chabilall Ramsarup said that the aim of the camp is to ensure that children are aware and equipped to handle disasters. The Retired Colonel pointed out that many times children lose their lives because they do not know what to do when a disaster, such as a fire occurs.

“I hope we can manage them and ensure that the seeds are really planted on fertile soil so that they can go home, teach their parents, brothers and sisters and school mates,” Colonel Ramsarup stated.

“We are hoping to do it every August. We don’t just want to do it in Georgetown, we also want to go out in other regions,” Ramsarup added.

UNICEF representative for disaster risk management, Ian Jones said that it is important for children to be participating in such camps. Jones noted that UNICEF continues to play a major role in the lives of children. 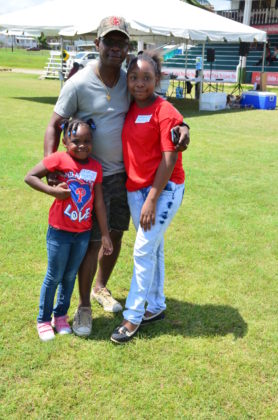 “We are very much involved in making sure that children are fully involved in disaster management,” Jones stated.

Beverly Stuart, a parent whose child is a participant of the camp said that she was very happy to have her child take part in the camp. “You hear about disaster reduction preparedness and you think it is something for adults alone, but now we should really involve the young at an early age and they just grow with all the skills,” Stuart said.

Another parent, Orin Porter noted that children need to know how to respond when a disaster occurs. Porter explained that, “children are part of that whole response team, they need to know, and they need to understand what they have to do so it is important that they are educated in that area.”

During the camp, the children were placed into groups and were given small prizes after completion of each task.

The CDC continues to implement Disaster Risk Management Systems (RDRMS) across all 10 administrative regions of Guyana.