The Chenapou Village, Potaro-Siparuni (Region Eight) will soon be launching its $5M Fuel Depot venture, as part of its Community Development Project (CDP) under the Amerindian Development Fund (ADF). 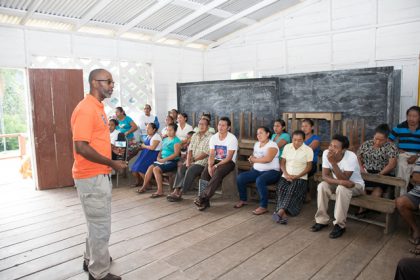 Chenapou is a small Indigenous community located on the bank of the Potaro River that feeds the Kaieteur Falls.

Simmons explained that the first business idea was to establish an aquaculture project, however, after the floods in 2017, the villagers decided that it was not economical to proceed with that project and instead opted for the establishment of a Fuel Depot.

During a recent visit to the community, Simmons said that he is pleased with the progress made to identify the land and construct the building to store the fuel.

“…the first tranche was released in 2016, they spent a lot of time mobilising and constructing the building, but they are on track. They are one of the villages we are happy about, and we want to commend them for the excellent work they would have done”, Simmons pointed out. 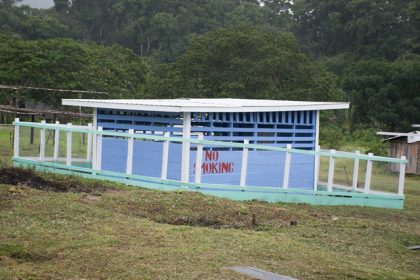 The building to stock the items has already been constructed and painted. The village is now awaiting the second tranche of funds to buy the fuel.

The project is being managed by the Village Council and the UNDP provides technical assistance and training.  A team from the Guyana Energy Agency also visited the community to educate the residents on the ‘dos and don’ts of retailing fuel.

Simmons explained that once the management team prepares and submit their financial report, they will receive the second tranche of the monies which will allow them to purchase the items that will be shuttled by plane from Mahdia.

Chenapou is one of 160 communities executing income generating projects amounting to $5M each. Among other projects being executed included, farming, agro-processing, aquaculture, poultry and cattle rearing, mining, village infrastructure including; construction of village office and multi-purpose building, village shop and museum, and transportation and tourism.

The project aims to strengthen entrepreneurial and institutional capacities of the village economy of Amerindian communities, improve linkages with the private sector to further develop value chains and strengthen institutional frameworks to support local economies.