September 11, 2018 – Vice President and Minister of Foreign Affairs Carl B. Greenidge today lauded outgoing Chilean Ambassador, His Excellency Claudio Rachel Rojas, for his efforts to further strengthen relations between the Cooperative Republic of Guyana and the Republic of Chile.

Ambassador Rojas called on Minister Greenidge where during this farewell visit, they discussed areas of mutual interest and reflected on his tenure in Guyana. The Chilean envoy also shared his hopes for the future of the relationship between the two States. 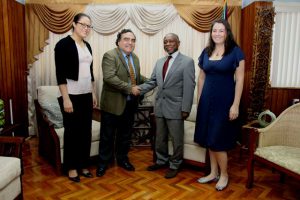 (l-r) Foreign Service Officer Ms. Sondra Cheong, Ambassador of the Republic of Chile to the Cooperative Republic of Guyana, His Excellency Claudio Rachel Rojas, Vice President and Minister of Foreign Affairs, the Honourable Carl B. Greenidge, and 3rd Secretary to the Embassy of Chile in Georgetown, Guyana, Ms. Carolina Faune.

According to Minister Greenidge, the Ambassador immediately began his tenure with determination, ensuring that Guyana benefitted from its relationship with Chile as well as from the Ambassador’s expertise.

“We valued your cooperation at the bilateral level and we are pleased to see that it has continued through the change of [the Chilean] Government,” Minister Greenidge stated.

Diplomatic relations between Guyana and Chile were established on July 22, 1971.

Bilateral relations were increased in 2015 with the opening of the Embassy of Chile located in Georgetown and the accreditation of Ambassador Rojas as the first Resident Ambassador to Guyana.

Through bilateral cooperation, Chile has extended technical assistance on data collection through Chile’s National Service of Geology and Mining (SERNAGEOMIN). Additionally, Foreign Service officials in Guyana benefitted from a course in Globalization and Global governments and Guyanese public servants were offered Spanish language training by the Government of Chile.

The two countries are commonly involved in a number of regional bodies, such as the Organisation of American States (OAS) and the Community of Latin American and Caribbean States (CELAC). Chile also engages Caribbean Community (CARICOM) under the South-South Cooperation framework and the CARICOM- Chile Joint Commission.