After losing her rented home to fire, a mother of three received a house lot during the Central Housing and Planning Authority land allocation drive.

Manroop was just one of the hundreds who received house lots at the land allocation drive held in the RDC compound of the Mahaica-Berbice region.

Bodhramani Manroop along with her husband Davinand Manroop and daughters Shelly, Sureeta and Rea ages four, two and one respectively, lost everything when the fire destroyed their home six days into the new year. 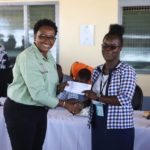 Minister within the Ministry of Communities Annette Ferguson handing over a letter of allocation to Andrea Cummings. 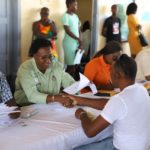 Minister within the Ministry of Communities Annette Ferguson addressing the concern of a resident. 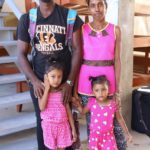 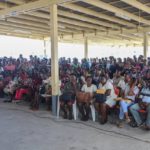 The hundreds of Region 5 residents attending the land allocation drive.

Today, the young mother and wife was overjoyed to have a plot of land, she can call her own. “My house burnt down and I am staying with my mother-in-law and I came here for a lot to build a home because I have three children, so I feel good because I do not have anywhere else to go,” Manroop stated.

Her mother-in-law she said is also renting and the placed is cramped.  Manroop noted that her husband – the breadwinner of the family – who works at a lumber yard indicated that his employer has offered to assist with the construction of the new home.

In her remarks, Minister within the Ministry of Communities Annette Ferguson reiterated that the government is committed to solving the housing needs of its citizens.

“We are here to serve and we know of the challenges, we know of the constraints that many of you face. So today… your government through the central housing and planning authority has allocated land so that you can now become true homeowners,” Minister Ferguson underscored.

A similar exercise was recently carried out in Region Six where over 300 lots were allocated.