The first of a series of consultations began Sunday evening with residents of North and South Sophia by the Central Housing and Planning Authority (CH&PA). The Government of Guyana in collaboration with the Inter-Development Bank (IDB) will be embarking on a series of Infrastructure and developmental projects – ‘Road Network Upgrade and Expansion Programme’ – in several communities in the North and South Sophia community. 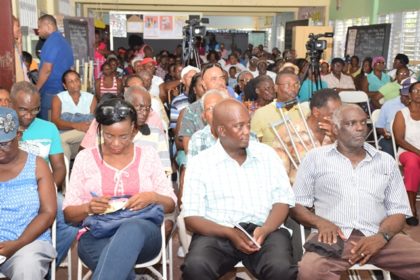 Residents of North and South Sophia at the CH&PA consultations hosted at the Sophia Primary School.

Proposed works include construction of roads and sidewalks, installation of street lights, upgrades to community grounds and buildings and subsidies for the construction of core homes and home improvements projects.

Senior Community Development Officer attached to the CH&PA, Donell Bess-Bascom, informed residents at the meeting, that the CH&PA is in the process of finalising the Reformation and Upgrade of the Habilitation Programme. She explained that funds have been diverted from the Mandela/ Sheriff Street project for the development of existing communities. Bascom said one of the requirements of the IDB and the CH&PA is to intensify the community development approach, since both organisations are keen on interacting with beneficiaries.

He added that the consultations are being held to ensure that the actual designs for the Core Homes are confirmed, and members of the community are aware of what will be taking place. He told residents that when the implementation begins the project members will require participation from the community.

After being apprised of what the projects entails, a number of concerns were raised by residents during the interactive sessions.  Squatting on the government’s reserve; several residents agreed that squatters need to be removed.  The majority of them were very vocal on the issue of Drainage.  One resident, Queen Isha Seepaul told the authorities that “unless proper drainage is in the communities none of the developments that you do would not make any sense.” 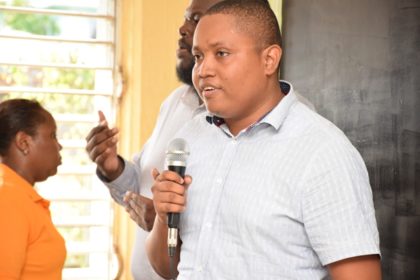 Calls were made for the Health Centre to be converted into a Cottage Hospital, and desilting of the major culverts in the communities.

Importantly, residents Clayton Hinds and Randolph Baptiste among others appealed for the involvement of young people in the community, in the implementation process of the project, through the provision of jobs. They explained that several young men need employment and this project can assist in them earning an honest living.

Some of the residents shared their views on the consultations with the Department of Public Information (DPI).

Seon, ‘A’ Field Sophia: “I think that it’s a great project but one thing I realise is that they are targeting one specific group and not targeting those that don’t have house lots, so I hope that can change in the future.”

Clayton Hinds, ‘B’ Field Sophia: “First off the bat I complement the government in addressing the issues the residents of this community. Over the past 23 years people have been occupying lands in this place and much of the development of what has taken place in this community is not due to the previous administration it is due to the people in the community who came together and did their stuff and develop themselves and the area around them.” 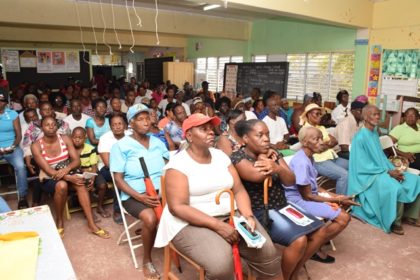 Residents of North and South Sophia at the CH&PA consultations hosted at the Sophia Primary School. 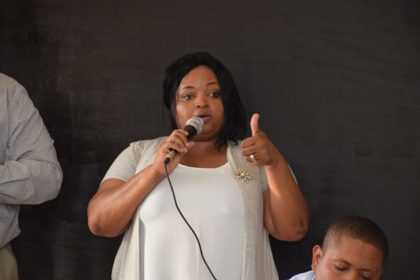