The Central Housing and Planning Authority (CHPA) continues to move apace with its efforts to curb the issues of squatting.

This was disclosed by Minister within the Ministry of Communities with responsibility for Housing Valerie Patterson-Yearwood, during the 2019 Budget debate in the National Assembly on December 3. 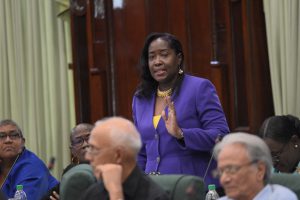 Minister within the Ministry of Communities with responsibility for Housing Valerie Patterson-Yearwood.

According to the Minister during 2018, the agency allocated approximately two hundred and eleven (211) regularized squatter lots while two hundred and nine (209) land titles were issued to ensure citizens reside in proper living conditions.

Minister Patterson-Yearwood also noted that the department continues to work with those persons who have been approved for allocations but are finding difficulty in completing payments.

She noted that CHPA is currently commissioning a study on squatting in collaboration with other relevant agencies the Guyana Lands and Surveys Commission (GLSC) to further address the issue of illegal land occupation.

The minister reiterated that the 74 informal settlers residing on the Lamaha Canal Reserves will be relocated to Cummings Lodge, East Coast Demerara in 2019. She said, “the buildings were numbered and household profiles were completed and an inventory is to be completed by year-end.”

Data collected by the CH&PA has recorded over 12,000 persons squatting across the country. The agency has worked in various communities, including Angoy’s Avenue in Region Six and Middle Road, East La Penitence in Region Four. Angoy’s Avenue the largest squatter settlement in Region Six had approximately 1,010 lots successfully regularised last year.