Chiung Mouth, Region 8 is the latest community to gain easy access to potable water, with the construction of a new Water Supply System at a cost of GYD $30 million.

The water system was commissioned by Minister within the Ministry of Housing and Water, Hon. Susan Rodrigues on Friday, April 30 in the presence of residents.

In October 2020, prior to being appointed to her post, Minister Rodrigues visited the village and pledged to address the water concerns of the villagers. She noted that after becoming Minister, the realization of the Chiung Mouth Water System was one of the first items on her agenda.

With Friday’s visit being her third time in the village, the Minister expressed her gratitude to GWI’s Hinterland Director, Mr. Ramchand Jailal and his team as well as the Contractor – R. Kissoon Contracting Services for their dedication in completing the well.

Minister Rodrigues further explained that although the completion of works succeeds the original timeline of December 2020, this was unavoidable due to the challenges posed by the inclement weather, which caused the rig to become stuck enroute to the project site.

Despite the challenges, she stressed the importance of turning a committment into a reality, regardless of how long it takes.

Mr. Jailal explained that residents had been without access to potable water for several years due to an aged water system becoming non-functional. He explained that the old well was too shallow and therefore didn’t last long.

As such, the villagers depended heavily on water from creeks, which are located long distances away from the community. They also practiced rainwater harvesting.

Managing Director of R. Kissoon Contracting Services, Mr. Rudranauth Roopdeo highlighted the many challenges experienced in executing the project, specifically as it relates to transporting the drilling rig and other machinery into the community. The contractor executed the project under the guidance of the Guyana Water Incorporated. Villagers were also employed to assist with some of the manual labour.

Chiung Mouth, which has a population of close to 200 people, now has access to potable water at their homes. The overall project entailed the drilling of a potable water well to a depth of 120 meters, construction of a concrete base on a hill and installation of a storage system, installation of a photovoltaic (solar) pumping system, the laying of more than 3000 meters of pipelines for a distribution network and 18 individual service connections.

The full project scope of the project was completed on March 31, 2021, allowing residents of Chiung Mouth to begin benefitting as of that date.

Toshao of the Village, Euseutact Augustine was elated to see and experience the realization of the new water system, while Region 8 Chairman, Mr. Headly Pio also thanked the Minister and other parties involved for seeing it to completion

Similar sentiments were also expressed by residents who no longer have to walk long distances to access water for their daily use. 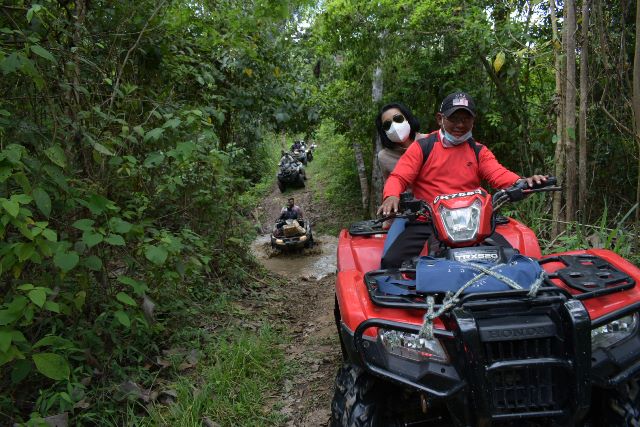