Friday morning, several Government Ministers joined the ten of thousands of Guyanese on the Parade Ground to Umana Yana route for the submission of the APNU+AFC list of candidates for approval by the elections body – GECOM.

The Guyana Elections Commission (GECOM) has set aside January 10, 2020, as Nominations Day. 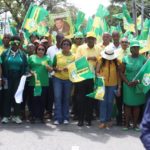 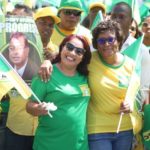 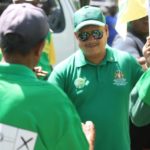 Minister within the Ministry of Public Infrastructure Jaipaul Sharma.

Prime Ministerial candidate and Minister of Public Security, Khemraj Ramjattan said he has never felt more confident and expects that on March 2, the Coalition Government will return to office with a massive victory.

Minister Public Infrastructure David Patterson said the coalition is prepared to contest the General and Regional Elections. “they have been calling for this election; the President has set the date and we are ready.”

“With the number of persons making up this massive crowd, this clearly shows to the entire world, that Guyanese have full confidence in the current administration,” Public Service Minister Tabitha Sarabo-Halley stated.

Minister within the Ministry of Public Infrastructure, Jaipaul Sharma noted that Guyana is prepared to return His Excellency President David Granger to office.

Meanwhile, Joseph Harmon, Director-General of the Ministry of the Presidency said he was selected to hand over the list of confident professionals who will continue to ensure ‘the good life’ is attain by every Guyanese.

The scores were later joined by His Excellency President David Granger and Prime Minister the Hon. Moses Nagamootoo.