Due to constant heavy down pours, the Cookrite Savannah in the Black Bush Polder, Region Six has been flooded.

Prime Minister Moses Nagamootoo who is currently acting as the nation’s President met with residents of the Black Bush Polder at the State House Wednesday afternoon.
Residents expressed grave concern for their cattle, many have died and are sick because of the high levels of water. 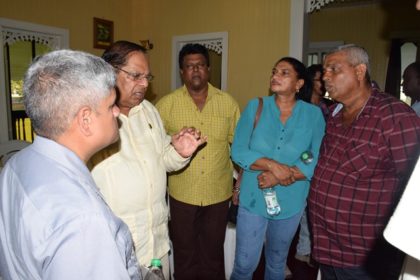 Residents asked for central government’s immediate intervention. The Prime Minister assured the farmers that the Ministry of Agriculture will work efficiently to give them all the help they need to alleviate the situation. He also recommended that an advisory be sent to the Guyana Police Force for stray animals not to be impounded. That a long term plan for a secure place to graze and rear cattle be found on higher ground, data collection of losses be recorded, vets (veterinarians) visit the area and assess the animals, a resident (farmer) source grass for the animals. He also confirmed that the pump at Ablion is working.

Quacy Joseph, a veterinarian recommended that bran and honey be substituted for grass until they can either source grass or the animals can find alternative grazing. A regional team will also make a follow up visit to the area Friday.

The National Drainage and Irrigation Authority (NDIA) engineer for Region Six, Lester Persaud explained the cause of the flooding. Persaud said that, the Cockrite Savannah is bordered by the Canje Creek and the Black Bush cultivation area.

Persaud pointed out that, “not because there is a flood the pump needs to operate 24 hours a day, “there is a system in place which is called the gravity flow system. The system works where, “You have a sluice, when the tide is low you open a door and the water flows out, when the tide is high you have to close this door and then pump is turned on.”

Junior Finance Minister Jaipaul Sharma was also present at the meeting and addressed the reported shortage of funds to purchase fuel for the pumps, which was reported in some sections of the media. Minister Sharma explained, regarding the funds of the Region Six budget that there are two programmes in the agricultural field; the Agriculture and Public works. In the Agriculture programme there is a line item called fuel and lubricants.

He further highlighted that there was a recent cabinet conference with the Permanent Secretaries and Regional Executive Officers, in which they presented a breakdown of the spending. It was revealed that, under Agriculture for Region Six $270.5M was budgeted, to date $48.8M was spent totaling 22 percent of what is budgeted. For Public Works $5.5 M was budgeted and only $898,000 was spent, a total of 16 percent. Minister Sharma said “So there is enough money under the line items to facilitate work and buy fuel for the pumps.”

The Regional Executive Officer Kim Stephen-Williams verified that, “there are sufficient funds to purchase oil.”