Coverage you can count on

Several persons living in Bartica auditioned for the role of radio broadcasters as the Office of the Prime Minister (OPM) and the National Communications Network (NCN) embarked on a capacity-building exercise at Radio Bartica.

The exercise, which ran for two days (July 19-20), was held at the Learning and Research Center saw proud Barticans from various backgrounds seizing the chance to serve their community in a holistically.

Speaking to the Department of Public Information (DPI), NCN’s Regional Radio Manager, Michelle Abraham-Ali remarked that the session was aimed at familiarising the trainees with skills needed to become a broadcaster. She said that while it is a common misconception that becoming a radio announcer is simple, the process entails a lot of work.

“We have to ensure that they appreciate very early in the orientation that it requires two things, an active and working mind, and the tool that we do this with, your voice. Your familiarity with language, the area around you and certain things happening around the country also play an important role,” she explained. 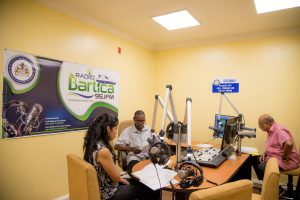 Regional Radio Manager, Michelle Abraham-Ali and Communications consultant on the Regional Radio Project, Dr. Rovin Deodat taking a participant through the paces during the auditions for radio broadcasters 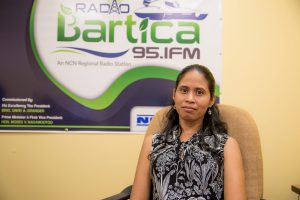 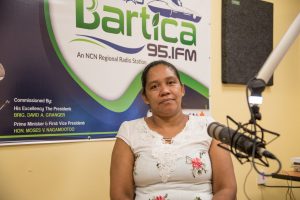 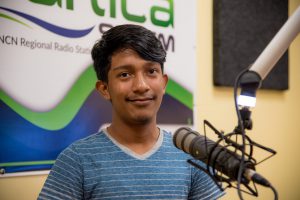 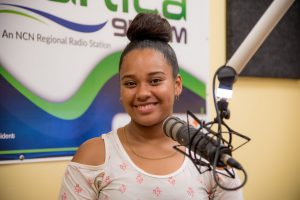 According to Abraham-Ali, many of the participants expressed an interest in being able to represent their community and having a platform on which they can address social issues and give a voice to the voiceless.

Among the participants was sixteen-year-old Susana Augustine who told the DPI that she hopes to use the radio to transform the lives of youths. “I want to become a broadcaster because it means serving my region,” she stated adding that it is an excellent platform to educate her peers on their rights.

Brad DeSousa is another young Bartican who is hoping to use the airwaves to impact the lives of youths not just in Bartica, but in hinterland communities.

Sherlene Bancroft told DPI that it “is going to be a learning experience”. Being a teacher by profession, she sees becoming a broadcaster as another avenue through which she can educate the children of Bartica and hinterland communities.

“Literacy has always been a problematic area for us… so should I become a broadcaster, I would have a platform on which I can encourage young students to improve their writing skills, their listening skills and their speaking skills,” she remarked.

The training, which is expected to commence in a matter of weeks, will be conducted by Communications consultant on the Regional Radio Project, Dr. Rovin Deodat. It was disclosed that similar capacity building exercises are slated to be undertaken at radio stations across the country.

For years, radio has been a crucial means of disseminating information to the masses especially to the most remote parts of Guyana. Since assuming office in 2015, the Coalition Government has emphasised the bridging of the communication gap between the coast and the hinterland. In keeping with this, radio station at Orealla, Aishalton, Lethem, Mabaruma, Mahdia and Bartica were commissioned to ensure that citizens in every corner of the country were receiving information in real-time.