The Ministry of Education today reported a 69.1 percent pass rate at the Caribbean Secondary Education Certificate (CSEC), up from 63.68 percent in 2017.

A total of 12,269 candidates were registered for 2018 CSEC, compared to 12,684 in 2017. Total subject entries for 2018 were 69,194. Speaking today at the official announcement of results at the National Centre for Education Resource Development (NCERD), Minister of Education, Nicolette Henry said the improvements are a result of the combined efforts by all.

Chief Education Officer, Marcel Hutson said this year’s results show that the sector is on an upward trajectory: “This year saw a total of 133 candidates attaining Grade One passes in eight subjects or more. Of these, 39 candidates secured 12 Grades One or more.”

Topping that list is Queen’s College student, Christian Pile with 19 Grade Ones followed by Shakira Bholo of the Anna Regina Multilateral school with 18 Grade Ones and two Grade Twos.

According to the Ministry, candidates were offered units in 33 subject areas. Each unit comprises of three modules and is separately examined and certified.

The overall pass rate in 2018 was 93.68 percent. This is an increase from 2017 when a pass rate of 92.57 percent was attained. An increase was also noted in the number of candidates securing Grades I, II, III and IV passes. 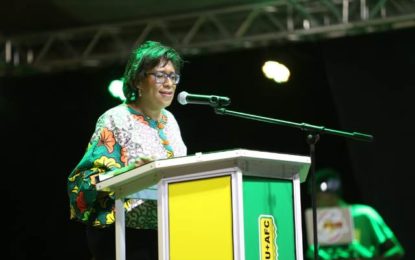 We have so much to be thankful for- Min Hughes