“You ought not to engage in what is referred to as vigilante justice,” Commissioner of Police, Leslie James reminded citizens. The admonition was given at a recent press conference by the Commissioner and stems from the recent vigilante justice meted out to a truck driver involved in an accident that claimed the life of a child.

The man suffered several injuries, including a fractured skull.

Commissioner James is calling on Guyanese to express restraint in such incidents reminding that at the highest level, President David Granger had made it clear that such actions will not be tolerated.

The Top Cop said those involved in the assault of the truck driver will face the full brunt of the law.

On several occasions, citizens have taken justice into their own hands. The Top Cop is warning that such persons can be charged and placed before the courts. 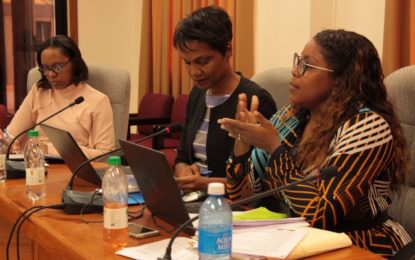 Author Details Editorial Editor email editors@dpi.gov.gy The Office for Trade Negotiations of the CARICOM Secretariat, in collaboration with the Ministry of Foreign Affairs, on Tuesday conducted a one-day sensitization session to inform key officials on how to identify and catalog existing... END_OF_DOCUMENT_TOKEN_TO_BE_REPLACED