The National Non-Communicable Diseases Commission has decided to host its “Water Wednesday” initiative twice a month to highlight the health benefits of drinking water.

Chairperson of the Commission Dr. Holly Alexander told DPI that the organisation had a vital role to play in the advocacy, promotion, and awareness of the benefits of healthy living and that Water Wednesday was one of the ways it would employ to do so.

“Wednesdays for the rest of your life should be called Water Wednesdays. We are asking persons not to drink the sweetened sugary beverages on Wednesdays but use water instead. The cost of drinking soda is higher when you get older because then you will have to be paying the doctor and using tablets and all that,” Dr. Alexander said.

Strategic locations are to be identified for the exercise and the Commission will reach out to donors and partners to maximise the impact of the initiative. 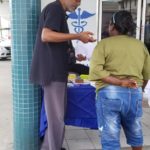 Commissioner of the National Non-Communicable Diseases Commission, Dr. Ronald Aaron shares the benefits of drinking water with a passer-by at the Water Wednesday activity on February 19 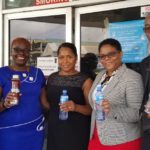 The Commission hosted the first Water Wednesday on February 19 at the corners of Camp and Charlotte Streets.

Passers-by were informed about the advantages of drinking water, including the fact that it regulates the body’s temperature, lubricates and cushions joints, and gets rid of waste through urination, perspiration and bowel movement.

They were also encouraged to choose water instead of sugar-sweetened beverages since substituting water for one 20-ounce bottle or can of soda saves you approximately 240 calories.

Commission members and staff from the Ministry of Public Health’s Chronic Diseases Unit distributed bottled water along with brochures, bumper stickers, and key rings with the simple message to choose a healthier lifestyle.

The activity also marked the re-establishment of the Commission with a new chairperson and extended life of tenure.